This week George Orwell’s classic “1984” has been published all the way back in 1949. The dystopian novel with its all-seeing leader “Big Brother” because a symbol worldwide for intrusive and oppressive government bureaucracy. The story is about Winston Smith and his attempt to rebel against the totalitarian state in which he lives. 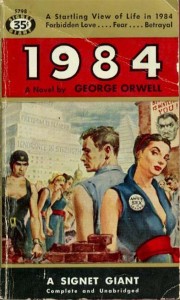 1) The original title of the book was “The Last Man in Europe”. The title was changed due to marketing concerns.

2) Some say that the title is simply the reversal of the year Orwell wrote the book – 1948.
Some say Orwell is alluding to the centenary of the Fabian Society, a socialist organization founded in 1884.
Others say this is Orwell’s homage to Jack London‘s novel “The Iron Heel“, which the power of a political movement reaches its power in 1984.
Yet others point  to G. K. Chesterton‘s “The Napoleon of Notting Hill” set in 1984, or to a poem that Orwell’s wife, Eileen O’Shaughnessy, had written, called “End of the Century, 1984“.
However, no one really knows why except Orwell himself and he took his secret with him to his grave.

3) Many aspects of the Oceanian society on the Stalin-era Soviet Union.

4) The novel also reflects many aspects of social and political life in the US and UK.

5) The currency of Oceania is the dollar.

6) The official party’s newspeak in the novel does not include capital letters.

7) The party newspaper is the times – not capitalized of course.

8 ) The oppressive party’s representative, O’Brien, is depicted as a member of the old British ruling class.

9) Orwell never explained how the world descended into the world of 1984. He only tells of the civil war England fought after WWII and eventually becoming part of a new world power.

Leave a Reply to Juju at Tales of Whimsy... Cancel reply