Article first published as Book Review: Frozen in Time: An Epic Story of Survival and a Modern Quest for Lost Heroes of World War II by Mitchell Zuckoff on Blogcritics

Frozen in Time: An Epic Story of Survival and a Modern Quest for Lost Heroes of World War II by Mitchell Zuckoff tells about the epic search for missing World War II Coast Guard soldiers who were on a rescue mission. The book provides and intense glimpse into a forgotten moment in history. 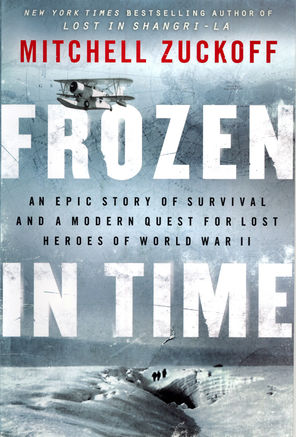 My rat­ing for Frozen in Time— 5

I truly enjoyed Zuckoff’s first book, Lost in Shangri-La and jumped on the chance to read Frozen in Time when I was offered. The book didn’t disappoint as Zuckoff has an uncanny ability to tell a story in a personal, yet comprehensive way which leaves the reader yearning for more.

The author describes Greenland as an almost extra-terrestrial land, a desolate world covered in ice and snow with ever-changing landscape which humbles the bravest of men. During the winter of 1942/1943 a group of American flyers were stuck on the ice, Zuckoff takes the reader to that time and the suffering which they endured, hoping beyond reason for a rescue.

The book is actually composed of two stories, one taking place during World War II when rescue attempts are made to rescue a fallen airplane crew, the second during a mission to find the missing Coast Guard rescuers. Both parts are interesting, engaging and enlightening, the strategic importance of Iceland is discussed as well as the importance of finding the missing men. The author took part of the recovery effort which gave the book an interesting twist, a historian making history.

This is an exciting story about many brave men and women who are trying to do what’s right disregarding personal safety. Mr. Zuckoff wrote an intense narrative of thrilling adventures of hope and survival, well researched and dramatic with a modern twist.

During the winter of 1942 a C-53 cargo plane crashed in Iceland, almost immediately rescue missions were started. Surviving in the frozen tundra in sub-zero temperatures is almost impossible and everyone knows it, it is imperative to get to the crew as quickly as possible. However, one of the rescue attempts falls short and the Coast Guard plane, a Grumman Duck, crashes as well.

Fast forward several decades later, Lou Spaienza is trying to retrieve the bodies of the US servicemen under a deep belief that no-one, dead or alive, should be left out in the field. Mr. Spaienza spent a huge amount of time and energy organizing a retrieval mission, his passion touched many people and even the author joined the party.

TLC Book Tour for Frozen in Time by Mitchell Zuckoff: