Eyewitness: A Personal Account of the Unraveling of the Soviet Union by Vladimir Pozner is an account of the 72 hour coup tried to overthrow Mikhail Gorbachev. Mr. Pozner is a famous journalist, part Russian, part American. 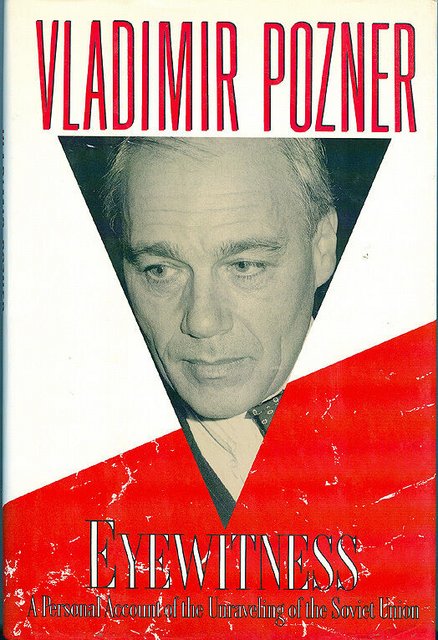 My rat­ing for Eyewitness — 3
Buy Eyewitness from Amazon.com*
More Books by Vladimir Pozner*

The author was witness to some of the events described in the book, to others he researched to try and tell a complete story. In Eyewitness: A Personal Account of the Unraveling of the Soviet Union by Vladimir Pozner he tells of the 1991 Soviet coup d’état attempt (the August Coup) in which members of the Soviet government tried to take control of the country from the Soviet President and General Secretary, Mikhail Gorbachev.

The leaders of the coup was lead by hard line members of the Russian Communist Party who opposed the reforms Mr. Gorbachev was trying to implement. The coup was opposed by a short and effective campaign led by Boris Yeltsin, and after two days Gorbachev was back in power. Short as it was, the coup destabilized the country and is widely considered a factor in the downfall of the Communist Party, as well as the dissolution of the whole country.

I found the book to be well written, but somewhat misleading. I don’t know enough about the history to second guess the author, but he did present some of his opinions as facts. He might not have written as much, but he left it to the reader to figure out whether or not the statement is fact or opinion.

The book uses the mechanism of flashback to often, and at very strange points in the book which hurt the narrative. I do appreciate the context, but I thought the book would be better either as a linear progression of the story, or use less flashbacks to be more coherent. The flashback also added a whole bunch of people which was difficult to keep track of, unless you’re intimately involved in the situation as the author was.

Nevertheless, I found the story of the coup and 72 hours to trickery and treachery to be a fascinating one. The narrative that deals with the main story is one which is hard to believe, but aren’t those the best stories in history?

Eyewitness: A Personal Account of the Unraveling of the Soviet Union by Vladimir Pozner