About:
Twenty Years After by Alexandre Dumas is the second book in what is now knows as the d’Artagnan Romances (the first being The Three Musketeers and the third being The Vicomte de Bragelonne). As in the previous book, the novel was serialized in 1845 before being published in book format. 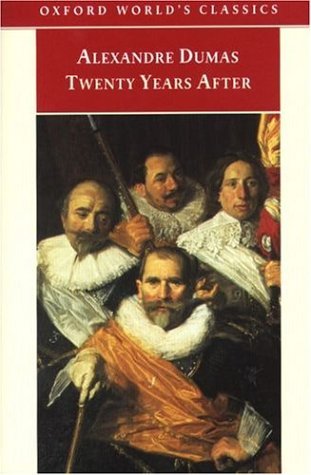 My rating for Twenty Years After – 5

Thoughts:
I found Twenty Years After by Alexandre Dumas to be as exciting and adventurous as its predecessor, but with cooler heads prevailing. Maybe because I’m at the age of d’Artagnan in the story which I thought was a delightful coincidence.

The novel is well written, well paced and character driven. Dumas did a great job redefining the relationship of the four friends (d’Artagnan, Athos, Porthos and Aramis) as they are older but also connected emotionally, rather than physically, to one another. The old friends have grown and changed yet I still felt an emotional connection to them much like one does with an old high-school friend who is no longer the same person you took classes with.

Much like The Three Musketeers, this novel also follows a complicated plot, where our heroes are trying to save the French and the monarchy from themselves. Dumas also incorporates many historical characters into his fictional story, interacting skillfully with characters of his imagination.

This is a courageous book, not because of daring deeds but because in a time like ours where no action hero ever ages, it is refreshing to read about foolish-types getting older and wiser. Dumas had courage in writing a novel about his popular heroes who have aged and the outcome is stimulating and exciting.

Synopsis:
The novel’s plot is complicated and would take more than a few lines to sum up. The son of “Milady”, the two-faced Mazarin smuggle the young king and his mother from Paris which is becoming hostile to the crown.