I feel that it is only appropriate that my first post would be about the book which inspired this blog. A book which still has a warm place in my heart due to the fact that I can still remember my grandfather reading it to me, even though it was the abridged version targeting five-year-olds.

“Don Quixote” in a new translation by Edith Grossman.  The classic story of a delusional knight which is still relevant and funny today as it was centuries ago. 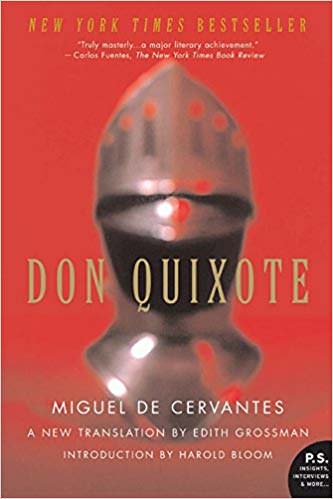 This is by far the translation of Don Quixote I have enjoyed the most.

I do not know if Ms. Grossman’s translation does justice to the original Spanish version because I haven’t read it but I enjoyed this book tremendously.

I enjoyed that Ms. Grossman tried to capture not only the story, but also the prose, rhythm and style of writing of the era even it was long winded and somewhat tedious. Even Cervantes’ self-deprecating and self-glamorizing humor is intact. The foot notes also help the non-Spanish speaker understand more of background to the stories, the prose and inside jokes.

Even though this book was written centuries ago I found it contemporary, charming, hilarious and accessible. I believe that it is a great disservice to Cervantes that Don Quixote is being thought of as a drama only to disregard the story’s comedic aspects.

Among the 1,000 pages of the book, Cervantes weaves unrelated background stories of characters which the duo meets on their adventures. I found that to be an advantage in such a long book because I could put the book down for a few weeks, read another book, and come back without missing a beat.

I believe that if you would take away the “classic literature” label from this book, which so many people find terrifying, you’ll find a funny story, sometimes sad yet very modern even by today’s standards.

While part one is whimsical, part two seemed to me very melancholy and more philosophical.
|

Alonso Quixano is a retired country gentleman in his fifties who lives in La Mancha with his niece and housekeeper. Quixano has become obsessed with books about knights and chivalry (very popular at the time the story was written) and believes that they are true to their words despite the fact that many of the events are clearly unrealistic. Quixano’s friends think that he has lost his mind from too much reading, too little sleep and food deprivation.
|
From here the delusional Quixano sets out in search of adventure and takes on his nom de’guerre “Don Quixote de la Mancha” while announcing his love to a neighbor’s daughter (unbeknown to her) renaming her “Dulcinea del Toboso”.
|
What follows are adventures of mishaps occasionally occurring because Don Quixote has a habit for sticking his nose in matters which are none of his business, using chivalry as an excuse to pick a fight wherever he can – only to be defeated, injured and humiliated. However, to be fair, Sancho Panza receives the brunt of those punishments
|
That is the end of part one.
|
Part two, which was written ten years later, reintroduces us to the now famous Don Quixote and Sancho Panza which are the victims of cruel jokes by rich neighbors. Don Quixote gains back his sanity and proves a capable ruler only to be met, again, with disastrous results.
He dies sane and sad instead of delusional and happy.