This week we celebrated the 200th birthday of famed English author Charles Dickens. The event was celebrated world wide and cyber-world wide so here is my little contribution. 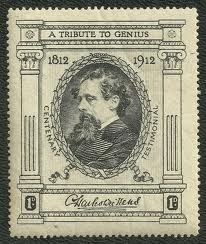 1 ) The first use of the world “Dickens” was in William Shakespeare’s The Merry Wives of Windsor as a profanity (“What the dickens?”).

2 ) Dickens probably had an obsessive-compulsive disorder. He was known for looking in the mirror and combing his hair several hundred times a day. If the furniture in his home wasn’t “correct” Dickens couldn’t concentrate and he made sure that every bed he was to sleep in was aligned north-south.

3 ) Much like the characters in his novels, Dickens loved to give people endearing, yet odd, nicknames (think Pip).

4 ) In his study, Dickens had a secret door designed to look like a book case. Some of the fake books in the fake case were Noah’s Arkitecture, a nine volume set titled Cat’s Lives and The Virtue of Our Ancestors which was so narrow the title was printed vertically.

5 ) Author Hans Christian Andersen was a close friend of Dickens. After a particularly long visit, Dickens printed a sign which he left in the guest room and read “Hans Andersen slept in this room for five weeks, which seemed to the family like AGES”.  Still, Anderson dedicated his book Poet’s Day Dream to Dickens.

6 ) On June 10, 1865 Dickens was traveling home from France when his train derailed while crossing a bridge. Seven of the eight first class carriages dropped into the river but the one Dickens was in dangled off the bridge. Dickens climbed up, found a conductor and obtained a key to free his friends. Afterwards Dickens took water and brandy rescuing some of those trapped in the wrecked cars below. When it was all said and done, 53 year old Dickens climbed back to the carriage dangling from a bridge to retrieved the installment of Our Mutual Friend that he has just completed.

Dickens was never publicly thanked for his actions, he wanted to keep it a secret because… he was traveling with his mistress.

8 ) The Old Curiosity Shop  was a phenomena not unlike Harry Potter. When the ship carrying the last installment of the series entered the dock in New York there were 6,000 impatient fans waiting.

9 ) Dickens has an amusement park named after him.  “Dickens World”, in Kent, England.

10) The Mystery of Edwin Drood was never finished. Dickens died of a heart attack before writing the ending and left no clues behind as to his intentions.