About:
Capital of the World: The Race to  Host the United Nations by Charlene Mires is a history book documenting the search for the UN’s home. Even though the book might be short in pages, it packs a lot of information in between. 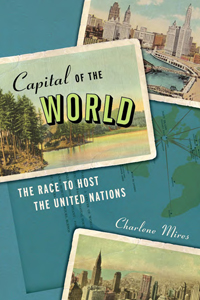 My rat­ing for Capital of the World— 4

Thoughts:
Capital of the World by Charlene Mires is dense, but fun book. It is no wonder the UN can’t make any decisions, if the way they decided to chose a “home” would have been any indication (committees for committees result in their resolve to make resolutions) they might would have rethought the way they do business.

However, the book is not a condemnation of the way UN does or does not make decisions, but a look a the promotional aspect of creating the “Capital of the World”. Originally, instead of a building, everyone thought that the UN will reside in a city and many people thought that their town would simply be perfect for this notion (of course tourist dollars would help offset the costs).

There were many towns vying for the honor, from the Black Hills of South Dakota to Chicago, from San Francisco to Niagara Falls, NY. Interestingly enough, New York City abstained from the race, thinking that they were the natural and obvious choice and hence didn’t need to compete with the rest.

Somewhere towards the middle of the book I had to put it down for a bit, I love my history books and the personal stories in them, but this book had so many details coming at me that I just needed a break. Ms. Mires was telling a good story but then it seemed to stop only to pick up a few chapters later.

I never realized that there was such a forceful campaign to host the UN or that at first a whole city was planned, it is a fascinating part of American history. The complex way in which the UN committee decided on a place and how they finally settled on NYC is a hysterical story for the ages.

Capital on the World is an enjoyable and informative read. It gives the reader a new perspective of America, the country that welcomed diplomacy and wasn’t afraid to engage in dialog after World War II.

TLC Book Tour for Capital of the World by Charlene Mires :