About:
War’s Edge: No Heroes by Ryan Aslesen is a science-fiction / military fiction novel about a future Marine recruits being sent to far off lands, and realizing the true cost of war, as well as the ugly truths behind them. 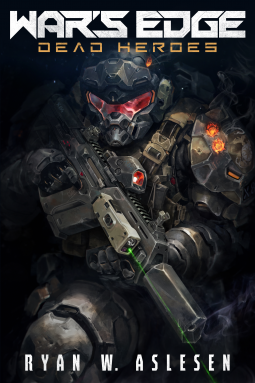 Thoughts:
Mr. Aslesen certainly knows military tactics, procedures, and has a healthy sense of irony and cynicism – maybe that’s why I enjoyed the book so much. As a bonus, War’s Edge: No Heroes by Ryan Aslesen is a well written, imaginative, and easy to read book.

The author really put a lot of thought into his world building, and created a complex, realistic world. Even though this is a wonderful science-fiction book, the story is still character driven which makes it an engrossing read.

Mark Rizer, the protagonist, got bored of college and decided to find some adventures in the elite forces of the United Systems Alliance Marines. He goes through basic training which was right out of a futuristic vision of Full Metal Jacket.

Frankly I found it a bit unbelievable that basic training is harsh that troops get killed, I know this happens but it’s certainly not by design, especially these days. That being said, the author did write a book where lives are cheap, humans are abundant, so I can certainly see that occurring. From a futuristic standpoint, it seems as if the military went backwards.

I also thought that the future military is too “old US centric”. The ranks are the same, or very similar, same with squads, platoons, attitudes, etc. For example, the decoration for a wounded warrior is still a Purple Heart.  These, however, are just pickings of an old soldier and an avid book reader, as well as a life-long cynic which I suspect the author could appreciate. I enjoyed the book and its vision very much.

The author just didn’t write a shoot’em up space western, he really put a lot of effort into trying to weave into the story to politics of this futuristic world. Much like ours, in the future politics and business make strange bedfellows and soldiers often don’t know if they’re fighting for their country or to protect the interests of a private entity pulling the strings behind the curtains.

The narrative is both riveting and compelling, extreme action is either present, or just around the corner. Our protagonist, of course, can’t catch a break which makes the story hold the reader’s attention throughout.

Synopsis:
Mark Rizer has dropped out of college to join the elite forces of the United Systems Alliance as a Marine. Mankind has perfected space travel in the 35th Century and Rizer knows he’ll be sent to on missions by government conglomerates to protect assets of interstellar corporations.

Before he becomes a Marine, Rizer has to get through a brutal boot camp. Soon enough though, Rizer is on Verdat, where he and his friends sacrifice themselves in unending conflicts.