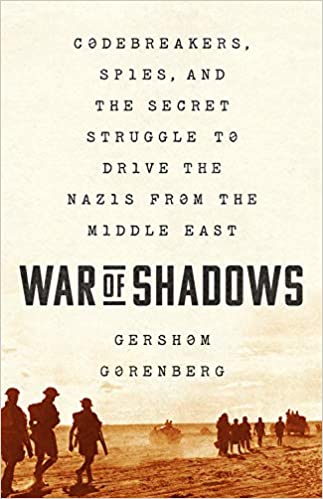 Thoughts:
This is a World War II book recounting the battles between Erwin Rommel, the Dessert Fox, and the British, ending at the battle of El Alamein. The author tells the story through the eyes of the participants, without much conjecture, but with fascinating analysis.  This is a history book about people and how their successes and failures changed history.

The battle for North Africa, at the time, had far reaching consequences. The might of the Nazi Army was on display, Mussolini’s Italian Empire was on the line, and of course control of the oil fields for the war in Europe. The Egyptians were promised to rule themselves if the Axis won, and that promise, worthless or not, had also its affects.

The book is dense, but mesmerizing. It requires attention from the reader but the author helpfully supplies a list of personnel in the front of the book if needed. If you are familiar with history of the Middle East after the battlefield moved to Europe you’d recognize how getting ready for a Nazi occupation shaped people and nations. For example, the Jews in Palestine took it upon themselves to train, as semi-professional army, or join the British forces, for defense against Rommel’s forces when they win Egypt and roll into Palestine. The Jews knew they were going to be massacred and wanted to put up a fight, the outcome would probably have been the same though. In 1948, however, the Jews had a disciplined, trained, and experienced soldiers and commanders. The rest is history.

The author mainly talks about events in Cairo and Bletchley Park, England focusing on failed spies and cryptographers. I enjoyed the center stage the cryptographers received (finally), and how their work, thankless and obscure for decades, had changed the outcome of the war. The author tells of the brilliance of humans, as well as the notion that no matter what, they are still the weakest link in the security chain and their mistakes cost dearly.

The book does a great job to taking a complex, and messy, narrative and shaping it for the reader to understand. It was amusing to read how an obscure, but genius, cryptographer working in a dank room had far reaching consequences on the other side of the world without anyone knowing about it. This is the history that I love to read, human stories with real consequences, unsung heroes who made a difference.

War of Shadows: Codebreakers, Spies, and the Secret Struggle to Drive the Nazis from the Middle East by Gershom Gorenberg is a fascinating read about a part of the war which doesn’t get as much attention. As a bonus, encryption, human intelligence, and signal intelligence have far reaching lessons which we should take to heart in today’s world of connected networks, which unfortunately it seem we haven’t learned much (in the humint category) since the late 1930s.