About:
Underwater: How Our American Dream of Homeownership Became a Nightmare by Ryan Dezember is a non-fiction book  that the author wrote after making it through the 2008 housing crisis. Mr. Dezember is a reporter for the Wall Street Journal. 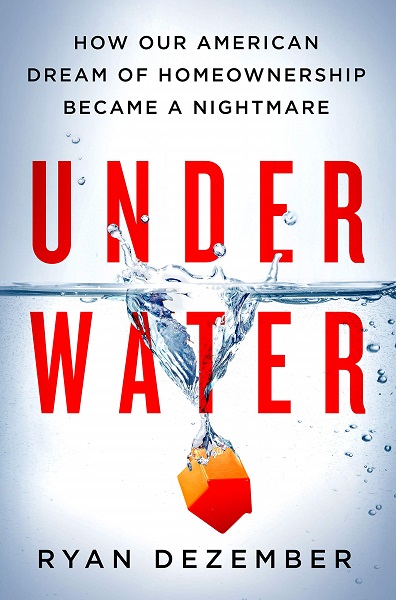 My rat­ing for Underwater — 4
Buy Underwater from Amazon.com*
More Books by Ryan Dezember*

Thoughts:
Part memoir, part financial history Underwater: How Our American Dream of Homeownership Became a Nightmare by Ryan Dezember gives the author’s perspective on the housing crisis, and how Americans are still feeling the effects of it decades later.

Mr. Dezember, like many people, found himself with a home that he can’t sell due to its worth dropping tremendously. The author felt it was his duty to pay back the money he borrowed, come hell or high water.
Did he do the right thing?
And if it was the right thing, was it for his sake or the bank’s?
Why did he feel so compelled to live up to his bad financial transactions when every bank and business do not feel obliged to do so?

These are some of the questions the author tries to answer in this book. Along with the analysis of his own financials misfortunes, the book also takes a look at the 2008 economic downturn. He describes what it feels like to own on your house more than its worth (underwater), as well as describing the flipping of condos in Alabama, sold and re-sold several times before they were even built.

The book goes back and forth between the author’s personal account, a look at the jaw dropping corruption which happened on a local level, as well as national, and even worldwide, implications.  The author does capture, on a personal level, what a terrible time it was for thousands upon thousands of people. To see your home, and probably your biggest investment, go down the drain is heartbreaking and certainly has lifelong affects.

Like many books about disasters, this is a slow rolling, but fascinating narrative which is difficult to comprehend, upsetting when understood, but impossible to look away.  I must suppose that the author dumbed down a few things to make the book readable for those of us who are not financial professionals. I think this was the right choice, while the truth is always more complex, it’s impossible to keep it all in one’s head and telling small stores, whether personal or about the shenanigans on the Alabama coast, it more relatable and understandable.