Theodore Rex by Edmund Morris is the second installment in the trilogy about the life of President Theodore Roosevelt. This trilogy is considered to be one of the best sources on the life of the 26th President of the United States. 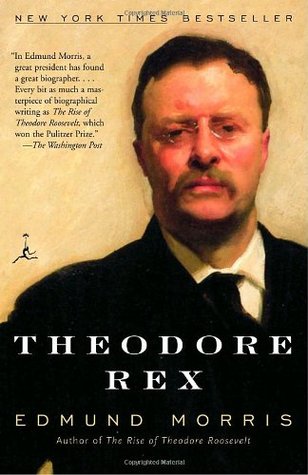 Theodore Rex by Edmund Morris starts where the last one ended, President McKinley died, and Vice-President Roosevelt ascended to the highest office in the land.  Politics and policy took front and center in this book, which was interesting, but Mr. Roosevelt’s life to a second seat.

Mr. Morris is certainly a gifted writer, I was especially interested in reading about his conservation policies, the Panama Canal, and the Russo-Japanese War (for which he won the 1906 Nobel Peace Prize) which I knew little about. This is a biography, however, and while it covers these subjects in great detail, personal tragedies and family life only merited a few sentences, a paragraph at the most.

Teddy Roosevelt was a fascinating and exciting man. He shot live rounds in the White House gardens, wrestled with all his children (including the girls), took dignitaries on excruciating hikes, had surgery on his leg with anesthesia, and enjoyed putting on protective gear with an opponent, and beating each other with sticks.
But these excellent stories are few, stuck between pages and pages of policy discussion and politicizing.

Alice Roosevelt or Princess Alice also gets mentioned a lot. I know she was a bona fide celebrity at her time, and even had a color named after her. She is an interesting subject, a wild teen, who became a witty, influential woman, and a magnet for all kinds of mischief and scandal. However, the rest of the family rarely gets mentioned. I can understand that because Alice performed official duties along with her future husband, Nicholas Longworth, and future President William Howard Taft.

The book ends with Teddy Roosevelt living the White House, but on his way for Africa. I read the incredible book, The River of Doubt by Candice Millard, about this journey, and am looking forward to read how the last installment of the trilogy approaches this subject.