About:
The Witch of Lime Street: Séance, Seduction, and Houdini in the Spirit World by David Jaher is a non-fiction book which takes a look at the popularization of spiritualism in the western world during the 1920s. 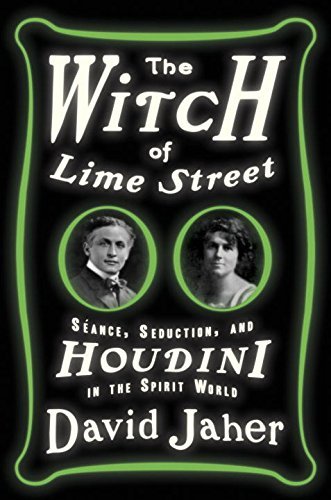 Thoughts:
The Witch of Lime Street: Séance, Seduction, and Houdini in the Spirit World by David Jaher takes place after World War I and a very deadly epidemic of the flu when everyone was almost guaranteed to have lost a loved one. During that time of great sadness and lost, people were desperate to know that their loved ones are well in the world beyond. As history teaches us, whenever there is great grief and tragedy, profiteers move in to capitalize and build an industry almost from scratch.

The book follows, mainly, three famous people: famed escape artist Harry Houdini, noted author Arthur Conan Doyle and Margery, a psychic who is able to fool even the most notable skeptics. The story of the era and the phenomenon is told mainly through the lives of these three, their friendships, battles and how they saw the world.

Harry Houdini really wanted to believe in the world beyond, so he could speak to his dearly departed mother. Houdini and his wife even agreed on a secret word, known only to them, which they would tell whisper beyond the grave. Never finding a credible psychic made Houdini one of the greatest skeptics of the time and he made it his mission to out fraudulent psychics.

Sir Arthur Conan Doyle, creator of Sherlock Holmes, was a true believer in the supernatural. Sir Arthur wished to speak again with his beloved son and truly believe that psychics can talk to dead people.

Margery is actually Mina Crandon, the wife of a Boston doctor who discovered her abilities after her brother passed away. Mina has no financial incentive to cheat people, her husband is famous, beloved and well off.

The book is really a battle of wits between The Great Houdini and Margery, who despite their competition came to like one another (for a time). Houdini despises charlatans who cheat honest, gullible people out of their hard earned money. Margery discovered a hidden talent and, my guess, is that she’s doing her shtick for kicks and giggles. Even members of a team sponsored by Scientific American magazine cannot disturb Margery’s séances, and some even fall in love with her.

This book is well researched and well written. The author tells an exciting story of the business of spiritualism and real people who became great friends and prodigious enemies all within a short period of time.

Buy The Witch of Lime Street from Amazon.com*

The Witch of Lime Street: Séance, Seduction, and Houdini in the Spirit World by David Jaher