About:
The Witch Doctor’s Wife by Tamar Myers is a novel set in the Belgian Congo. The book describes the Congo beautifully as well as the experiences of Christian missionaries. 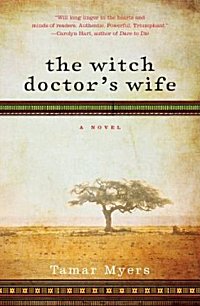 My rating for The Witch Doctor’s Wife – 4

Thoughts:
The Witch Doctor’s Wife  by Tamar Myers tells the story of Cripple is First Wife (of two) of a witch doctor named Their Death. She is a smart woman who constantly gets discounted due to her appearance. When a huge diamond is introduced into their lives a web of unfortunate events set off a tidal wave of dangers fueled by greed.

For me, the premise of the novel, nothing is what it seems; gets tested almost every chapter with the main characters as well as the fascinating individuals they encounter. Ms. Myers’ makes that point several times during the story as well as the informative short paragraphs which introduce every chapter and tell the reader about the plants, animals and culture of the area.

The book is not told from one point of view, but from several points of view which is very interesting because the reader has an idea of how the several characters in the book see themselves (the natives, the Belgians, etc.)

I found The Witch Doctor’s Wife easy to read and it kept up my interest both from a cultural perspective as well as an interesting storyline. The characters were fascinating and the author made an effort to keep them “gray”, not all good and not all bad.

Amanda Brown, a young missionary from South Carolina, travels to the Belgian Congo in 1958 in order to oversee a missionary guest house in the town of Belle Vue. Belle Vue is a diamond mining town in which the race by the Belgian occupiers to get as many riches as they can before the forces of independence takes over is a major concern.
When the lives of these two women cross, they and the people they interact with are tested in ways none of them ever imagined.
Zohar — Man of la Book
Dis­claimer: I borrowed this book from the local library.
*Ama­zon links point to affil­i­ate account
--- Please like and follow ManOfLaBook.com ---