The Wisdom of Frugality: Why Less Is More – More or Less by Emrys Westacott is a book containing essays by the author on the pros and cons of being frugal. Mr. Westacott is a writer, author and a professor of philosophy at Alfred University in Alfred, New York. 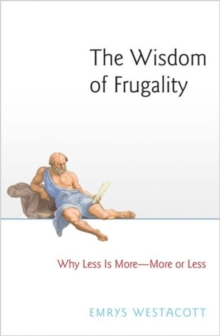 I consider myself a frugal man. Being frugal takes a bit of work, self-control, discipline and what would be considered a super-human power of persuasion if you have small kids. So when I saw The Wisdom of Frugality: Why Less Is More – More or Less by Emrys Westacott I immediately wanted to read it as to give myself some more understanding and ammunition to store for my persuasion warehouse for future use.

Frugality is not being cheap, there is a big difference even though many people might not agree (they’re wrong). To me, frugality means what would be the best use of my hard earned money. Do I need to spend this money? Is there a better way of spending it? Can I do without the item?

An example would be a washing machine. Can our family do without one? Sure, but is it frugal in the long run? Would buying a washing machine be cheaper than simply going to a laundromat? According to the website Apartment Therapy, the cost of doing a load of laundry at home is $0.97 vs. $3.12 at the laundromat (2013 numbers and includes supplies and driving time, but excludes the cost of the machine).

Mr. Westacott examines why smart people have been preaching frugality since the dawn of the written word. He asks many questions and challenge some notions on frugality based on this new world we live in. After all, many appliances are cheaper to replace then to fix and some things which seem to be an extravagant displays of wealth (cell phones, running water, in-door-outhouse) are now part of a standard of living – at least in these United States.

The author goes a step farther and examines the cons of being frugal, is it really necessary in today’s throw-away American society? Is being frugal good for today’s national economic model? Does living frugally really makes you happier?

This book is a deep study of frugality, written in an easy to read and interesting manner. Mr. Westacott wrote an informative, readable book which reflects on frugality in modern times.

Buy The Wisdom of Frugality from Amazon.com*
More Books by Emrys Westacott

The Wisdom of Frugality: Why Less Is More – More or Less by Emrys Westacott