The Unexpected President: The Life and Times of Chester A. Arthur by Scott S. Greenberger is a biography recounting the life of America’s 21st President. Mr. Greenberger  is a published author, and the editor of the news website Stateline. 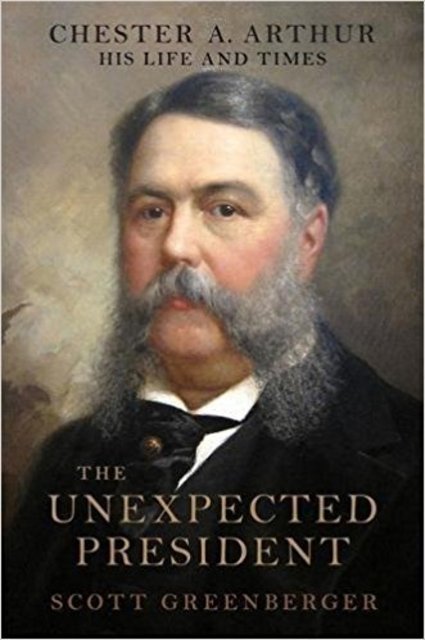 The first time I heard of Chester A. Arthur was when I read an article in a Men’s Journal about manly presidents (at the time when it was still printed). I believe it was memorable because Mr. Arthur was given last place, much of it because of his insistence on having an indoor bathroom.

The Unexpected President: The Life and Times of Chester A. Arthur by Scott S. Greenberger recounts the important events in his life, as well as his rise to the highest office in the land. A political functionary who suddenly found himself in a place he never wanted.

Arthur was a lawyer, who successfully sued the Third Avenue Railway on behalf of Elizabeth Jennings Graham. Mrs. Graham, an upstanding African-American citizen was denied a seat. A high-profile case for a young lawyer, which helped lead to the desegregation of New York City’s public transportation.

As a NY political functionary, in an era of political patronage, Arthur held the post of customs collector for the Port of New York. This was an extremely powerful position, appointed by President Grant, with the nudge of Roscoe Conkling, NY’s political boss. Arthur was assistant quartermaster general of New York in the Civil War and rose to the rank of Brigadier General. Arthur was removed from his post by President Hayes, attempting to reform the spoils system.

During the 1880 Presidential election, James Garfield surprised everyone, himself included to get the nomination. Chester A. Arthur was selected to be his running mate, once again, surprising everyone including himself. As we all know, President Garfield was assassinated shortly after his election.

I always maintained that people see things differently once they’re the ones in charge, and Arthur was no different. Once sitting in that big White House, in that oval room, behind that big desk, he alienated machine politics. He signed legislation that forced government jobs to be distributed on merit and not political connections. And to the chagrin of many, also prohibited obligatory political donations from employees.

But what about the book?

I enjoyed this book, despite the lack of documents left to us by Arthur. He destroyed all his papers towards the end of his life. The few documents we do have, for example, his correspondence with Julia Sand, a handicapped New Yorker, were because she kept them. The letters fill out some of the book but frankly aren’t that interesting.

The book simply tells of significant events in Arthur’s life, and what was going on elsewhere. However, I felt that there was little insight by the author about Arthur.  This is not the author’s fault, of course, but other biographies I read have much more source material which makes insights into the subject possible, as well as more enjoyable.

There are very few books about President Arthur, I’m glad I read this biography and learned more about him. The presidency years are around a sixth of the book, which I found strange. I still don’t know what made Arthur the man different from Arthur the President, but the story itself is certainly fascinating.

The Unexpected President: The Life and Times of Chester A. Arthur by Scott S. Greenberger