About:
The Tunnels: Escapes Under the Berlin Wall-and the Historic Films the JFK White House Tried to Kill by Greg Mitchell is a non-fiction book about the infamous Berlin Wall and the tunnels being dug during the Cold War.  Mr. Mitchell has wrote many non-fiction books on US politics and history. 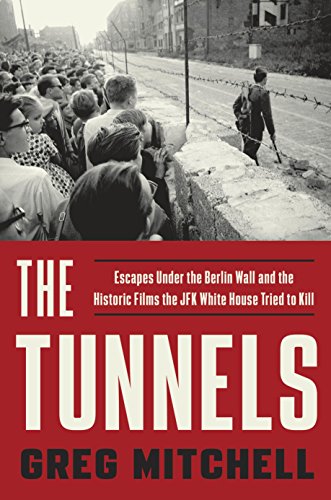 My rat­ing for The Tunnels — 5
Buy The Tunnels from Amazon.com*
More Books by Greg Mitchell

Thoughts:
The Tunnels: Escapes Under the Berlin Wall-and the Historic Films the JFK White House Tried to Kill by Greg Mitchell is a thrilling narrative, written in an exciting format exploring the attempts to rescue East Germans by building tunnels under the Berlin wall. The book specifically follows two attempts and the international politics during the time.

When the Soviets put up the Berlin wall to “protect” the East Germans, the Kennedy administration actually breathed a sigh of relief because they were being accused of luring people to the west. Those who wanted to come to the West had to find creative means to do so including swimming, making a run for it, being smuggled out, hot air balloons and, of course, tunnels.

The tunnels needed much corporation though. The authorities in West Berlin had to turn a blind eye, whoever had the tunnel’s end in East Berlin needed to be brave and accept that they could be arrested any day (families included), and of course fit people to manually, and quietly, dig hundreds of yards.

The author tells the story of the two tunnels incorporating the diggers, spies, an American TV network that sponsored a tunnel along with the rights to film the work and rescue (under strict secrecy), the Kennedy administration’s dilemma of how to handle the refugees while  dealing with Russian politics.

Buy The Tunnels from Amazon.com*
More Books by Greg Mitchell