About:
The True Story of the Great Escape: Stalag Luft III, March 1944 by Jonathan F. Vance is the historical account of the largest prison break during World War II. Mr. Vance is a Canadian author and educator. 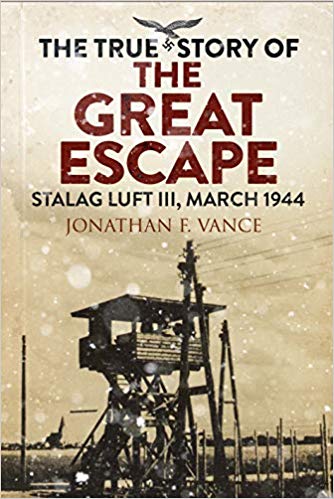 Thoughts:
Many people only know of the events in this book from the fictionalized 1963 Hollywood account, but as often occurs, truth is stranger than fiction, and often much more mesmerizing. In The True Story of the Great Escape: Stalag Luft III, March 1944 by Jonathan F. Vance the author recounts the evens which led to the escape, and the aftermath.

This book is being re-released to honor the 75th anniversary of what we call now the “Great Escape”.  Mr. Vance’s well researched and very readable account of the men of Stalag Luft III is exciting and personal. Each soldier gets a mini-biography (peppered throughout the book as they are introduced) , and it is obvious that the author really looks up to these guys.

The English officers saw it as their duty to escape, this they reasoned, helped the war effort by keeping the German troops busy with them instead of on the front lines (amazingly, they were correct). The fascinating thing is that the German officers understood this (in this case, where airmen are concerned at least), and while still punished the captured men, it was with a wink and appreciation of their efforts.
Like a cat and mouse game.

The author goes to describe how the prisoners made their escape materials, clothes, fake documentation, money, and more. They had to be careful and alter their uniforms so they won’t be caught with civilian clothes and executed as spies.

After the “Great Escape”, at the personal command of Hitler all the officers were executed, a war crime which reverberated throughout this horrible war. Even the German guards were shaken and quietly pointed out that it wasn’t them (the Luftwafa) who committed this atrocity.

While the book drags on in parts, I still found it very powerful. The story is remarkable and, while dealing with a short timeline, had much larger implications.

Buy The True Story of the Great Escape from Amazon.com*
More Books by Jonathan F. Vance*