The Time in Between by María Dueñas is a novel following the life of a Spanish woman’s journey from her humble beginnings as a poor seamstress, to an English spy during World War II. This novel is an international best seller and is Ms. Dueñas first book. 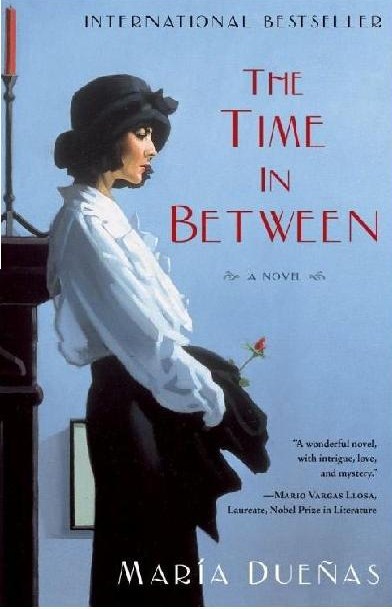 My rat­ing for The Time in Between — 4

The Time in Between by María Dueñas is an enjoyable and captivating book covering the Spanish Civil War and its aftermath to the end of World War II. The point of view, that of Spain and some from Morocco, during World War II is also very interesting, one I haven’t read about before.

Some of the chapters seem to be fillers to catch the reader up on some history, in an already long book. I thought they could be done a bit better and shorter, but I did enjoy much of the information presented.

The novel is slow to begin, but quickly the pace becomes faster and more enjoyable. The book weaves historical and fictional characters together to create a good and exciting story-line, as well as a primer on Spanish history. The plot of this novel is fascinating, the story is excellent and the characters are interesting and engaging.

I had this book on my nightstand for a very long time, I guess the length of the book (624 pages) as well as the subject (a Spanish seamstress) put it down at the bottom of the list, but I’m glad I picked it up. This is a story for everyone who likes a good historical novel, or a descent espionage novel.

At age twelve, Sira Quiroga sweeps the atelier floors where her single mother works as a seamstress. At fourteen, she quietly begins her own apprenticeship. By her early twenties she has learned the ropes of the business and is engaged to a modest government clerk. But everything changes when two charismatic men burst unexpectedly into her neatly mapped-out life: an attractive salesman and the father she never knew.

With the Spanish Civil War brewing in Madrid, Sira leaves her mother and her fiancé, impetuously following her handsome lover to Morocco. However, she soon finds herself abandoned, penniless, and heartbroken in an exotic land. Among the odd collection of European expatriates trapped there by the worsening political situation back on the Continent, Sira reinvents herself by turning to the one skill that can save her: her gift for creating beautiful clothes.

As England, Germany, and the other great powers launch into the dire conflict of World War II, Sira is persuaded to return to Madrid, where she takes on a new identity to embark upon the most dangerous undertaking of her career. As the preeminent couturier for an eager clientele of Nazi officers’ wives, Sira becomes embroiled in the half-lit world of espionage and political conspiracy rife with love, intrigue, and betrayal.