The Ten Year War: Obamacare and the Unfinished Crusade for Universal Coverage by Jonathan Cohn is a nonfiction account of the political battles to create, and dismantle, the Affordable Care Act (ACA). Mr. Cohn is an author and journalist, writing mainly on US public policy. 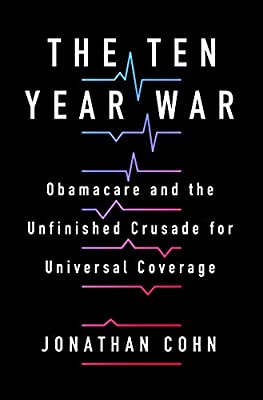 Love it or hate it, the ACA seemed to have touched a lot of lives, some for better, some for worst. Morever everyone has an opinion on this legislation, much less one that is grounded in realism, mostly on the basis of political ideology regardless of facts (in my experience).

The Ten Year War: Obamacare and the Unfinished Crusade for Universal Coverage by Jonathan Cohn sketches out the history of healthcare as a public policy from the 1970s to today; in addition to the battles fought in Washington DC about it. Furthermore Universal coverage, as Mr. Cohn points out, was at first a conservative idea. In addition, it aligns very nicely with ideals both Democrats and Republicans can agree on such as self-responsibility, business profitability, and fiscally responsible.

As a matter of fact, the author points out the both Presidents Richard Nixon and Ronald Reagan embraced universal healthcare enthusiastically. Additionally, the Republican Party, by far and large, embraced Romneycare’s individual mandate in Massachusetts (transferring the onus from small businesses, to the individual).

When President Barak Obama introduced the ACA as his landmark legislation, he found himself defending Republican initiatives against those who previously championed them. The ACA, as we all know, was not perfect. Furthermore, it included some unbelievable lazy passages which were fodder for lawsuits for years to come.

In the book, Mr. Cohn takes a good look at this most contentious legislation. This is not a liberal look at the ACA, but a timeline of all the wheeling, dealing, compromises and political maneuvering done by both parties to pass, and later get rid of this legislation.

The Ten Year War: Obamacare and the Unfinished Crusade for Universal Coverage