“The Soprano State: New Jersey’s Culture of Corruption” by ace political reporters Bob Ingle and Sandy McClure is a non-fiction book which examines New Jersey‘s love / hate relationship with the corrupt political class. You don’t have to live in New Jersey to read this book, I’m sure these shenanigans go on in other states, just not as flagrant or as often.
| 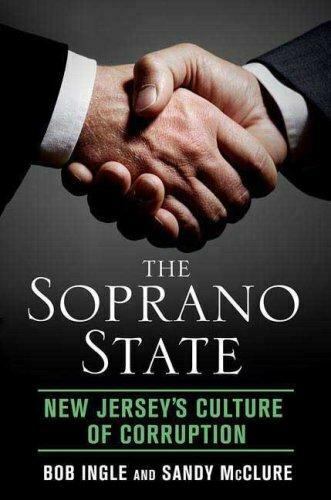 This book should be required reading for any adult – especially in New Jersey – maybe then the average New Jersey voter will stop voting the same crooks into office year after year. Besides listing acts which would make any descent person ashamed to show themselves in public, this book makes a point to mention that the corruption is in the culture.
After all, if everybody commits pension fraud then why shouldn’t you?
|

“The Soprano State” is informative, funny and entertaining yet horrifying at the same time – as a New Jersey resident I felt like I needed to take a shower after every chapter or segment. Only in New Jersey would the state government attempt to close 12 (twelve) public parks to save $4 million while building a “public” park behind the statehouse to the tune of…$87 million.

Then they go crying crocodile tears because the state is bankrupt and they “must” raise taxes.

I clearly remember when James “I am a Gay American” McGreevy resigned. I was on a cruise for our honeymoon and busted out laughing, telling the rest of the passengers that gay or not gay – McGreevy only resigned to avoid going to jail as a sitting governor.

Ah, yes – the joy of being from New Jersey.

Some reviewers said that this book is biased. Yes, there are more stories about corrupt Democrats than Republicans, but that is because Democrats ruled New Jersey for decades. However, to give credit where credit is due, the authors do include Republicans, since they also had their run, and give them the same “credit” they give the Democrats.

There is plenty of blame to go around, even though a lot of it spread throughout the United States since those that destroyed this once beautiful state are now retired elsewhere since they cannot afford to live in NJ – after they helped destroy it.

Did this book change anything?

A little – maybe. The same crooks were voted back into office, the same shenanigans are happening in broad daylight (New Jersey voted a Republican governor as a referendum against the Democratic incumbent – no national politics involved regardless of what the media might want you to think), corruption is rampant, the politician-busting federal prosecutor is now governor but the lawyer that defended all the corrupt politician is now the federal prosecutor (bad choice Mr. President).

I’m sure we’ll see “The Soprano State” 2, 3, 4, 5… New Jersey has endless material and this book didn’t even scratch the surface. After all Co-author Bob Ingle was saying that they had to cut some stuff out of the book because the editor insisted they’ll supply references, otherwise no-one would believe that this book is not a work of fiction.