About:
The Second World War Illustrated: The First Year by Jack Holroyd is a non-fiction book which covers the beginning of World War II. This is the first volume of the series. Mr. Holroyd had designed and written five volumes on the First World War, commemorating the 100th anniversary. 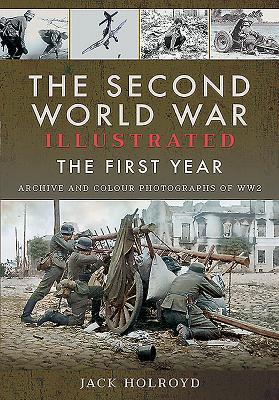 Thoughts:
This is the first book I read by the author and it covers the first few years of World War II. The Second World War Illustrated: The First Year by Jack Holroyd starts with acknowledging the factors leading up to nations taking arms, and Hitler’s meteoric rise.

The author is not afraid to acknowledge that the after the First World War, the Germans were mistreated and that the Treaty of Versailles made some serious errors in judgment. Instead of helping the world heal, the treaty made somethings worst which a charismatic madman could capitalize on.

The book is full of pictures, many of which I have never seen, each one with an engrossing caption. All of the big players (Churchill, Roosevelt, Stalin, and others) are featured, of course, as well as other main personalities.

I enjoyed the snapshots which are included in the book. Those random pictures people or professional photographers took really tell a much larger, and bleak, story than the professional portraits which are also included.

The book is arranged in a chronological order. The reader can choose whether or not they’d like to skip sections, read the captions are just look at the photographs

Any World War II or history buff would enjoy looking through this book. I thought it was well done and built a logical narrative using pictures and captions.