The Rise of Theodore Roosevelt by Edmund Morris is a biography of the 26th President of the United States. This is the first book of a trilogy, is also considered to be the authoritative biography of the President. 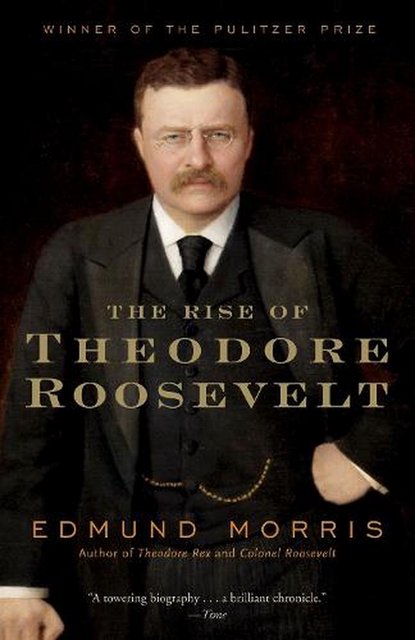 This is, to be sure, not the first book I’ve read about Teddy Roosevelt. However, upon finishing this book I didn’t realize how many books about him.

I’ve been looking to read Edmund Morris’ three-part biography for several years. Actually, I was attempting to read the President’s biographies in order but decided that I might as well read The Rise of Theodore Roosevelt after visiting the President’s home, Sagamore Hill, this summer.

This was a fascinating book, and certainly intensively researched. Mr. Morris’ narrative is very readable, it is obvious he is fascinated, as well as amused by Mr. Roosevelt. Reading the book, one can even understand how Roosevelt talked.

The whole early life of this man was fascinating. From his Harvard education to his time spent on the Dakotas. Especially fascinating, as I assumed it would be, was his time with the Rough Riders. A man with excellent memory, he memorized all the men, almost a thousand. He shook the hand of each and every one of them, with tears in his eyes, when the outfit was disbanded.
And they were welcomed at the White House anytime, no appointment necessary.

The book really sets up the man we know as President, his morals, ambitions, as well as strong personality.  Using the famous quote of Chauncey Depew, a Republican politician, that “Teddy wants to be the bride at every wedding and the corpse at every funeral.” The author goes ahead and proves that saying to be true.

Furthermore, I was encouraged to learn that Roosevelt, a learned man, was not afraid to change his mind when presented with new facts . However, most of all he admired individual achievements which shaped his early life, and later on his policies.

Buy The Rise of Theodore Roosevelt from Amazon.com*
More Books by Edmund Morris*

The Rise of Theodore Roosevelt by Edmund Morris