About:
The Return of Tarzan by Edgar Rice Burroughs is the second novel in about the Lord of the Jungle. As its predecessor, the book was first published in a pulp magazine during 1913 and only later published in book format (1915). 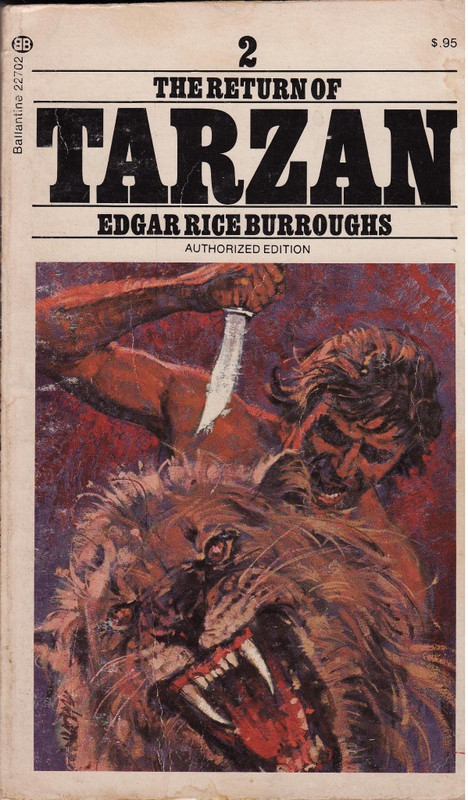 Thoughts:
As I was reading The Return of Tarzan by Edgar Rice Burroughs several things struck out at me almost immediately: I have read this book before, Burroughs cannot write dialog, uses too much coincidences but Burroughs can sure spin a yarn and write action

The moment I read the name “Rockoff” I knew I read this story before. I did not remember particulars and vaguely the story-line but I’m sure I read it somewhere around the tender age of 10 – where I was already a prolific reader. In this regard, reading this book was like visiting with a longtime old fried, reliving adventures from the comfort of your own home.

Much of the dialog was ridiculous; no-one speaks or has spoken like that. Rockoff, and man whose as bad as they come, has the best lines (curses: “Name of a name”) and d’Arnot is not far behind. I don’t know if Burroughs meant that as an over the top adventure, or just make it kid friendly as is done these days but to my ears the dialog sounded wooden.

That being said, this is a fun book. The action sequences are magnificent and exciting, the story borders on the ridiculousness but Burroughs embraces that and guides the reader with an expert hand throughout. Sometimes one just needs a simple story, suspends belief and have a grand ol’ time.

Synopsis:
The novel starts where Tarzan of the Apes ended, the ape man is recovering from his sacrifice at marriage to Jane Porter and goes to visit Paul d’Arnot in France. On the ship Tarzan becomes involved in the affairs of Countess Olga de Coude and her husband, Count Raoul de Coude while two people try to prey on them.

The two are Nikolas Rokoff and Alexis Paulvitch and, as it turns out, Rokoff is the Countess’ no-good brother. Tarzan denies the villains their scheme at every turn. In return, the Count finds Tarzan a job as a special agent in Algeria with the ministry of war. After some adventures, Tarzan sails to Cape Town and finds that Hazel Strong, Jane’s friend, is one of the passengers. However, Rokoff and Paulovitch are also there and manage to throw him overboard.

Somehow Tarzan manages to swim ashore to find himself in the coastal jungle where he was brought up. This time Tarzan ins smarter and befriends Busuli of the Waziri tribe which adopts him. Tarzan help the villagers defend themselves against ivory raiders and they elect him to replace their chief. The Waziri tell Tarzan where they obtain their gold, a lost city inhabited by beast-like men. The tribe takes Tarzan to the lost city where he is captured and condemned to be sacrificed to the sun god. The priestess is a beautiful woman named La, she speaks the language of the apes and tell Tarzan he is on the city of Opar.

Will Tarzan escape?
Will Jane marry Clayton?
Will Rokoff get away with his evil schemes?