The Resistance Girl by Mandy Robotham follows Norwegian citizens during World War II, discovering that the Nazis are impregnating local women to enhance Aryan genes.  Mrs. Robotham is a journalist, who became a midwife, and who is now a writer. 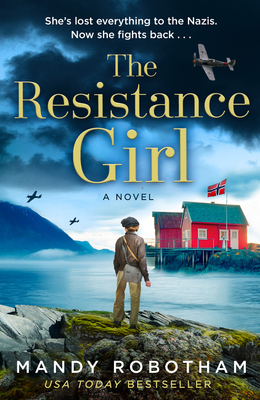 This is a story that one might never hear about. I read a whole bunch of World War II books, but I’ve never heard of the Nazi intent to impregnate Norwegian women and steal their children to enhance Aryan genes.

The Resistance Girl by Mandy Robotham tells of these events, as well as others involving the occupation of Norway. Through her characters, the author shows the sadness, tragedy, as well as bravery which involved being in the Norwegian resistance in 1942.

This is a well written historical-fiction, the characters are absorbing and their intentions clear. The reader becomes interested in the future of the characters, and the dangers they face. The courage of the Norwegian resistance is always in the background, and often front and center.

Baby trafficking was an actual order given by Hitler, part of his plan to turn Norway into a Nazi utopia. In Mein Kampf, the pathetic oppressor actually admitted that he considered those of Viking roots to be at the top of the Aryan blooldline. Thousands of women either had consensual relations with Nazis, or were raped. Either way most of the babies were stolen, to be given to German families. Ironically, after the war the Norwegian government declared those mothers and their children “mentally retarded”.

For a book about baby trafficking, there was very little about the subject. I thought there would be a build up to it, especially when Lebensborn camp was introduced, but that was the beginning and end of it. I understand the author tried to personalize the program through Anya, but I expected more of the narrative focus to be on it.

I certainly appreciated the stress and dangers the protagonists went through. However, I especially enjoyed reading about the cultural importance of the ocean, boats, food, and knitting to my surprise. As a side note, from some reason this book sells under the “Religious Historical” category. I’ve no idea what’s that about as I didn’t get that any religion references whatsoever.

Rumi Orlstad is part of a Norwegian group that smuggles British agents, supplies, and fugitives across the North Sea, into Scotland. The operation, Shteland bus, is done right under the noses of Norway’s Nazi occupiers and their local helpers.

Together with an SOE (Special Operations Executive) agent Jens Parks, Rumi is trying to help smuggle Anya, her childhood friend. Anya was date raped by a German officer, and was put in a program to give birth to Aryan babies which will be then sent to Germany.

The Resistance Girl by Mandy Robotham