About:
“The Profession” by Steven Pressfield (website |Facebook) is a fictional book about the project future of America. The story is told from the perspective of a solider on the ground. 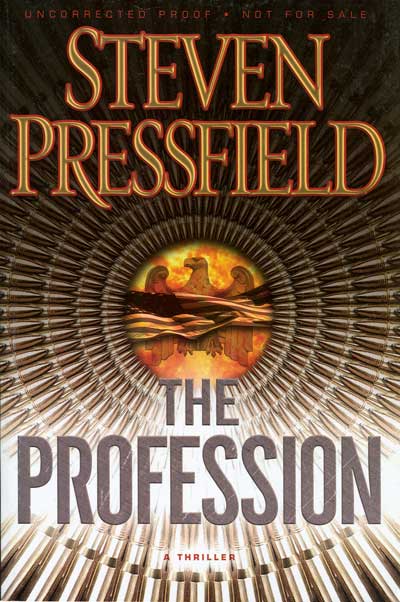 My rating for The Profession – 5

Thoughts:
As an ex-solider who gave much after-the-facts thoughts to his time in uniform “The Profession” by Steven Pressfield spoke to me on several levels. If you read any of Mr. Pressfield’s books before, you know the amount of research he does, not only on historical facts but also on an emotional level.

The system in these United States, of having the head of the military be a civilian, is smart because the soldiers themselves are loyal to their commanders. However, our Commander in Chief is up high and too divisive, for the past several decades, to garner much loyalty from mud level troops.

As an amateur student of history I believe that one of the common traits of successful generals is the ability to connect with the troops on some personal level. It is said that when Napoleon was reviewing his soldiers he could connect with them on a very personal level (“didn’t we fight together at …? How is the arm?” Etc.).

From personal experience I also know that commanders who took personal interesting in me or any of my friends got our almost unwavering support.

The hero of this gripping story, Gent, feels the same way about his commanding General. Even though General Salter fell from grace, he still garners much loyalty from his troops, views many of them as his sons and leads by example.

I felt that General Salter is an amalgamation of several famous generals who have made their mark on the world, from Julius Caesar to Erwin Rommel and several others.

Mr. Pressfield envisions a future where private armies for hire roam the world, professional soldiers realize that they could do better than fighting for a cause they don’t believe in, for people who they don’t like. We see these attitudes today, which are prominent due to the Internet, however I believe they have always been there.

The diminishing geological resources, the erosion of the American society and the fickle world economics, where nothing is certain, all play a big role in this novel. The novel shows what American society is (consumerism, to each his own) and what we like to think our values our (truth, freedom, community) and how the society and values are challenged by reality.

The book assumes certain classical knowledge of military history, however it is certainly not a distraction or a must in order to enjoy the book. If you’ve read Mr. Pressfield’s previous books you’ll get the references.

While the book certainly isn’t perfect, it is thought provoking and reflective.

So tell me, do you feel that American values are in decline? What about perceived values?

Synopsis:
The year is 2032 and Gilbert “Gent” Gentilhomme, a professional solider, commander and mercenary, is being sent around the world fighting for corporations. Gent’s wife, a hard nosed reporter, allows him to see some of the big picture, but his trust and loyalty to his commending general is unwavering.

Soon Gent realizes that fighting without a flag has its drawbacks as the oil producing regions enforce their dominance.

Zohar – Man of la Book
Disclaimer: I got this book for free.
Article first published as Book Review: The Profession by Steven Pressfield on Blogcritics.

BOOK BLOGGERS – Have you read “The Profession”? If so link up your review below: