I got this book for free.
Article first published as Book Review: The Perfect Nazi: Uncovering My Grandfather’s Secret Past by Martin Davidson on Blogcritics. 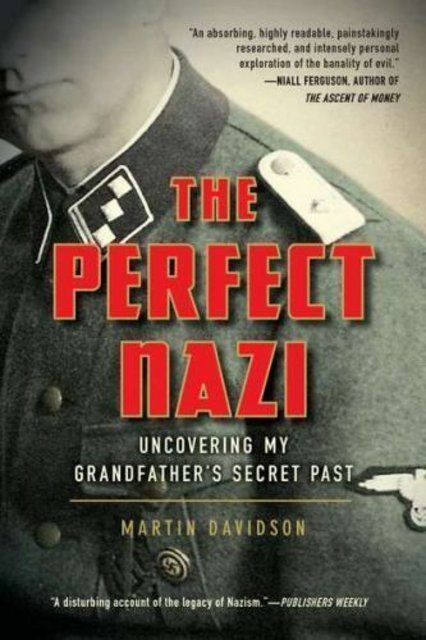 My rating for The Perfect Nazi – 4

About:
“The Perfect Nazi:Uncovering My Grandfather’s Secret Past” by Martin Davidson, a non-fiction book which follows the authors research about his grandfather, an SS officer. Mr. Davidson hit it on the nose when he wrote that this book “is a cautionary tale, a living example of the harm even little men can achieve in times of historical madness”.

Thoughts:
I have been working on the genealogy of my family for many years now.  I boast about 2,500 in my family tree going back to around 1,550. I have discovered lost cousins, opera singers, concert musicians but never, to my knowledge, anyone as notorious as Martin Davidson discovered in “The Perfect Nazi”.

Mr. Davidson is a television producer for the BBC but as a child growing up in Scotland he thought his grandfather was simply a retired German dentist. However, Bruno Langbehn was no mere dentist, but a proud member of the Nazi party wearing his Gold Party Badge (given to those who joined early and hence can claim low party ID numbers) with pride till his last day.

In the book, Davidson is forced to confront reality. His grandfather wasn’t a German jumping on the bandwagon, but a thug committed to the ideals of the National Socialist Party. While Davidson didn’t find out if his grandfather committed any atrocities, he was certainly one of the enables which helped Hitler’s rise.

As a young man Bruno Langbehn devoured literature which glorifies war and truly believed the anti-Semitic propaganda which inspired many to join the National Socialism movement.
The pen is indeed mightier than the sword.

Bruno Langbehn is of no-note to history, which is why this book is so compelling. Mr. Davidson tries to give an insight into the mindset of a thug, one of thousands on which the rise to power of the Third Reich was based upon. This insight is unsettling but makes a forceful tale.

For me, the most disturbing part of the book was the last chapter – Bruno’s after war years. Never been brought up on war crimes (due to his law rank), Langbehn was allowed to continue practice dentistry and, amazingly, kept his own name while reaping the fruits of the economic boom West Germany was privileged to enjoy. All the while keeping to his ideological roots, never wavering from his lifelong beliefs of the National Socialist Party.

Having several family members whose life were made miserable by thugs like Langbehn, I found that aspect extremely disturbing.

This is an important book which shows the harm each and every one of us can create when the world goes nuts!

So tell me: what would you do if you find out your grandfather was a “bad guy”?

Synopsis:
Growing up in Scotland, Martin Davidson knew his grandfather is a man who likes to tell jokes and stories. After his grandfather died Mr. Davidson discovered that his grandfather had many skeletons in his closet, not the least are a membership in the Nazi party (one of the first to join) and wore with pride his SS uniform.

Mr. Davidson goes on to investigate his grandfather’s role in the Third Reich and the atrocities committed under that banner. The story is written about Bruno Langbehn, but is paralleled to the rise and fall of the Third Reich.

BOOK BLOGGERS – Have you read “The Perfect Nazi”? If so link up your review below: