The Paris Library by Janet Skeslien Charles is a novel following a young librarian working in the American Library in Paris during World War II. Ms. Charles in an award-winning author, this is her second novel. 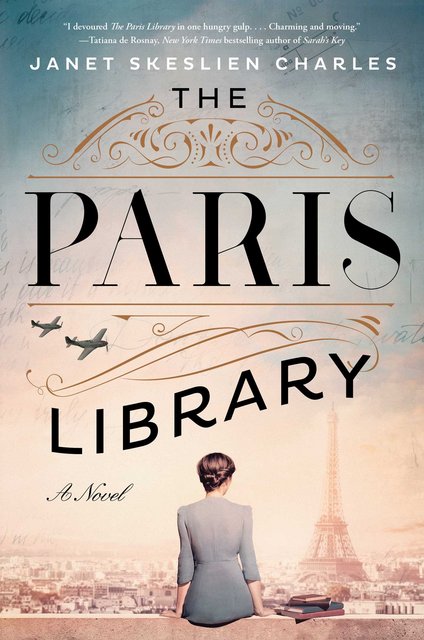 I made it no secret that I really enjoy books about books, and, of course, books about World War II. Even though my kids tell me that at this point, at least for generation Z, dads and WWII is now a meme.

The Paris Library by Janet Skeslien Charles is told through the eyes of two young women, living in different times. The first is in 1939-1944, where Odile’s sheltered life is being shattered, the second is in 1983, through the eyes of Lilly who is also dealing with big changes in her life, albeit not a world war.

The most interesting part of the book, for me, was the description of the American Library in Paris, where Odile works. Since Odile just started working there, we learn with her about the library, its goals, mechanizations, and the peculiar characters which work and frequent the building.  I enjoyed reading about the way the staff worked during the war to continue operations, support Jewish subscribers, sending books to soldiers, and saving valued manuscripts from Nazi hands.

The romantic parts were not my cup of tea, and I thought they were out of place. Odile and her boyfriend / fiancée romp throughout Paris in abandoned, yet fully furnished apartments. I understand this point of the story, which becomes clear later on I could have done without the flowery descriptions of their love making.
But that’s just me.

I also thought Odiel’s reaction to the realization of what people close to her did to survive during the war was somewhat disproportionate. But I found it interesting the author chose to write about it, how the world Odiel thought was coming together, is still falling apart, and how people who loved her, and she loves, will do horrible things out of necessity – and for her sake.

The author worked at the American Library in Paris in 2019, and her love to the place shines through. The book concentrates on life in Paris during WWII, how the Parisians lived, and the affects the war had on them, not realizing at the time how lucky most of them were.

In 1939, Paris, Odile Souchet has her life on track. She’s working in her dream job at the American Library in Paris, a great boyfriend working as a cop, and a loving family. When the Nazis conquer France Odile realizes how fragile her reality is, how fast people change, how choices between bad and very bad must be made. Odile survives the war by concentrating on one thing: saving books from the Nazis.

Lily lives in a small town in Montana, she’s writing a report about France and in usual teenage chutzpah approaches her French neighbor, the “war bride”, for an interview. As Lily and Odile grow closer, the past is discovered, secrets unveil, and the two find they have more in common than they thought.