About:
The Nearest Exit by Olen Steinhauer is the second book featuring ex-CIA assassin/family man Milo Weaver. The novel involves the fictional “tourism” department of the CIA and it is the secondbook in the Milo Weaver series. 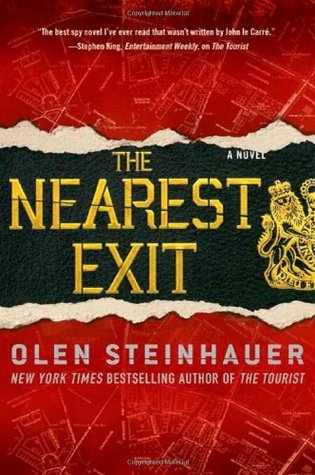 Thoughts:
If Mr. Steinhauer keeps writing this way he’s soon going to be in the list of my favorite writers. In The Nearest Exit by Olen Steinhauer bats the story out of the park again, with an unbelievable plot involving the CIA, Germany’s secret service as well as a guest appearances by the Ukrainians and Chinese.

As in the first book, The Tourist, the plot is complex and the narrative flows. The author keeps his excellent story line of vague political morals where the good guys and bad guys seem to be cut from the same cloths, only working under different flags.

The central theme of this book is whether or not taking the life of an innocent child could be used as a reason for the greater good. The question becomes what exactly is “the greater good”, are those that decide this point looking out for the population at larger, or for their own self-interest. In Milo Weaver’s world, full of amoral co-workers, the twists never stop and the sense of justice doesn’t even exist.

As in the first book, Mr. Steinhauer doesn’t shy away from pitting his protagonist’s job against his personal life. Weaver keeps paying a very steep price, personally, for his decision to be a moral beacon in an immoral environment.

The world built in this book is a complex maze of shadows and shifting realities. There are no bad guys, because there are no good guys for comparison, as seen from the trenches of the espionage world.

Synopsis:
Milo Weaver is enjoying his quite life after leaving the CIA. As Milo soon finds out, his services are needed again when he is forced back into the “Tourism” Department.

To prove his loyalty to his new bosses, Milo kidnaps a young German immigrant, only to later discover she was killed. Milo, now wanted for murder, must unravel layers of bureaucracy and double crosses to solve this mystery.