About:
The Names Heard Long Ago: How the Golden Age of Hungarian Soccer Shaped the Modern Game by Jonathan Wilson recounts how the Hungary’s changed soccer and became a powerhouse exporting players and coaches to the world. Mr. Wilson the Football Correspondent of the Financial Times and author of other books on the subject. 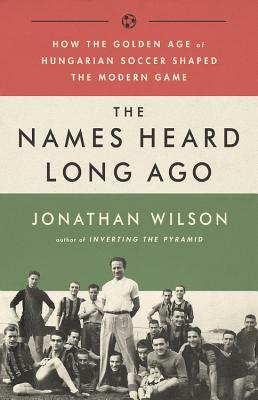 Thoughts:
One of my favorite memories is going to the 1994 quarter-finals for the FIFA World Cup with my father. We watched Bulgaria beating the defending World Cup champion Germany 2-1. To this day it is considered one of the top ten upsets in any world cup, and one of the top ten days I spent with my dad.

The Names Heard Long Ago: How the Golden Age of Hungarian Soccer Shaped the Modern Game by Jonathan Wilson is an enjoyable book which tells of the glory days of Hungarian soccer. The author goes into a bit of details into tactics and how the Hungarians coaches learned from England and improved the system.

The book gets interesting during the mid-1930s when anti-Semitism and Nazism enters the picture. Many of the soccer clubs, star players and coaches were Jewish. While some of them managed to escape, or survive World War II due to their skills and /or fame, many others didn’t. The author tells of some of their exploits trying to live through the war, only to be hit in the face with Communism when it was over.

Even though the Nazis did ravage Hungary, as well as much of Europe, Communist Russia managed to take the well-known, and feared, Hungarian national soccer team and destroy it. I still remember when Hungary was talked about as a fearsome adversary which I was a kid, and that was about two decades after this book ends.

The book is expertly researched, Mr. Wilson obviously loves the game and its history. The author is familiar not only with the players, coaches, management, and clubs, but is also aware how they interact and how one event reflects, changes, or cascades into others – some of which are repercussions felt today in the world of soccer.

Buy The Names Heard Long Ago from Amazon.com*
More Books by Jonathan Wilson*

The Names Heard Long Ago: How the Golden Age of Hungarian Soccer Shaped the Modern Game by Jonathan Wilson