“The Mother Toungue: English And How It Got That Way” by Bill Bryson is a book which I highly recommend to any bibliophile of trivia enthusiast (triviaphile?).  For any person who ever had to learn to idiosyncrasies of the language, this book will provide a fascinating overview of the strange rules and nuances of English.  If you think that learning English is not a big deal, try to define the word “what”. 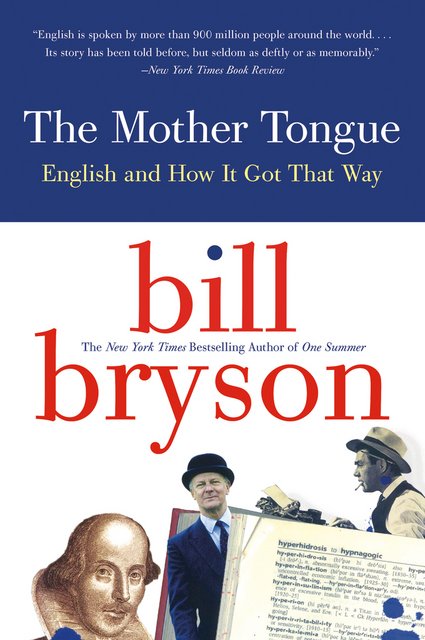 My rating for The Mother Tongue – 3
You think you know English? Buy this book to find out why you don’t*
More Books by Bill Bryson*

Mr. Bryson had the advantage of being an American journalist in England, so he takes into account the American English and English English varieties and the differences (some subtle, some not-so-much) between them.  The first several chapters are a general introduction to English, how it has become the language we speak today and why it has been globally accepted. For obvious reasons these chapters move between what we know, what we think, and what we guess has happened over the course of several centuries.
|

The real meat of the book appears in the latter chapters where a large number of surprising facts appear (Shakespeare introduced 1,685 new words to the language) as well as how the definitions of words changed over time. Bill Bryce is also brave enough to tackle the bane of all English speaking people – spelling.  Among many inconsistencies and illogicalities – as we all well know – the author also manages to make a case for the peculiar spelling of different words.  It seemed to me that Bryson was also sympathetic to spelling reforms, which I am not against for certain words (enough…?) but feel that a great deal would be lost if we spelt words phonetically.

“The Mother Tongue” is not a history book in any sense of the word, but simply a collection of amusing and fascinating pieces of trivia grouped by topic (barley though).  As a person that had to learn English as a second language, the curiosities of the structure and strangeness of spelling were always

While I did not find this book as laugh-out-loud amusing as Bryson’s other books, I was still glad I read it.  The book is a quick read and the reader can either read it straight through or jump around from chapter to chapter, or whatever picks one’s interest.  Bill Bryson’s love of the English language shines through the book, even though it might seem a bit opinionated

“The Mother Tongue” is not a detailed history of the English language, but a light reading which is informative and interesting.  The book is engaging, funny and full of lighthearted trivia.

“The Mother Tongue”is divided into 16 distinct chapters. Each chapter can be read on its on and does not build on the previous chapter. Starting with  “A Short History of Language” touches on how languages developed, and ending with “The Future of English” the book encompasses many subjects. Pronunciations, varieties, and spelling are all addressed as well as the good and the bad of the English language.

And the chapter about cursing is worth the price of admission by itself.
More Books by Bill Bryson*

The Mother Tongue by Bill Bryson