The Master and Margarita by Mikhail Bulgakov (Мастер и Маргарита) is a Russian novel, published in the 1940s and is considered a classic of satire Russian literature. Mr. Bulgakov was born in, what is today, Ukraine and enjoyed great success during his lifetime. 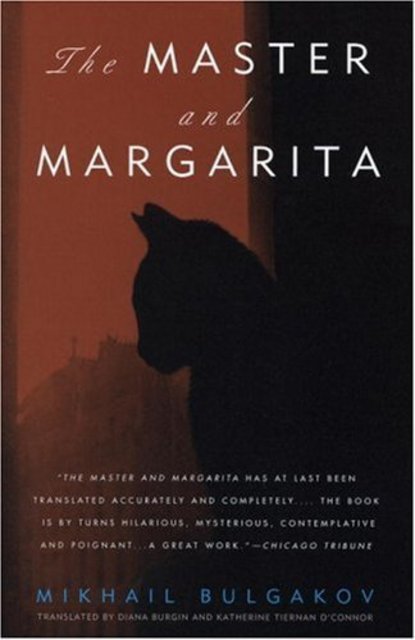 This book is both a social commentary and a satire (as they usually are) about the Muscovites literary elites of the time.  The author makes fun of everyone from the ruling elite, to writers, politicians, and Christianity just for good measure.
It’s no surprise that the Russian government censored the full novel until 1967.

The Master and Margarita by Mikhail Bulgakov tells of a time when Satan showed up in Moscow, and gives everyone what they want. From there destruction and hilarity ensues, causing chaos in the whole city.

Throughout the novel, there’s a retelling of the story of Jesus of Nazarath and Pontius Pilate. Actually it’s more of Pilate’s story, making him a sympathetic, as well as complex character. Much like everyone else, Pilate is not all good, nor all evil.

The novel does have its insane parts. A cat with a gun, naked witches, magic and trickery. From the insanity it goes to a tender narrative of the fate of Judas, and Margarita’s rough life. This creates an interesting, funny, novel but also disjointed at parts.

Margarita herself is only introduced at the second half of the novel. There’s also some disjointed love story which didn’t work for me, however, Margarita ended being one of my favorite characters in the novel.

I’ve never heard of this novel until recently, I truly enjoyed it and certainly glad I read it. The satire is still funny and relevant. The people in Moscow are no different than in other places, and the outrageous absurdities still hold true.

Fun fact: the novel inspired Mick Jagger to write “Sympathy for the Devil”.

During the 1930s, Satan appears at Patriarch’s Ponds disguised as Professor Woland. Satan is accompanied by four followers: Azazello, a hitman, Hella, a female vampire, Koroviev, his valet, and Behemoth, a huge talking black cat who loves chess as well as a good drink. The gang intends to target the literary elite and their trade union (Massolit).

Woland (Satan) is confronted head of the Massolit, Berlioz. Woland tells Berlioz how he’s going to die, which he indeed does in the exact manner. The conversation is witnessed by the young poet, Ivan Nikolaevich Ponyrev. After warning society of the dangers of the gang, Ponyrev is promptly put into an insane asylum.

Margarita, devoted to The Master who she believes to be dead, gets the chance to become a witch, and enters the realm of night. Surviving several challenges, Margarita gets an equally important wish granted from Satan.

The Master and Margarita by Mikhail Bulgakov