Article first published as Book Review: The Liberator: One World War II Soldier’s 500-Day Odyssey from the Beaches of Sicily to the Gates of Dachau by Alex Kershaw on Blogcritics.

About:
The Liberator: One World War II Soldier’s 500-Day Odyssey from the Beaches of Sicily to the Gates of Dachau by Alex Kershaw is a non-fiction book about the amazing journey of officer (later General) Felix L. Sparks. The book is an excellent, well researched account of soldiers on the ground and the liberation of Dachau.

The pub­lisher is giv­ing away one copy to three (3) winners of this book –to enter fill out the Raf­fle­copt­ter form at the end of the post. 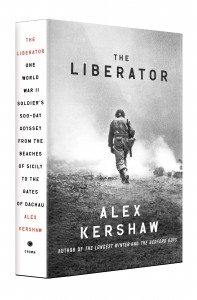 My rat­ing for The Liberator — 5

Thoughts:
The Liberator: One World War II Soldier’s 500-Day Odyssey from the Beaches of Sicily to the Gates of Dachau by Alex Kershaw is a dramatic narrative which follows Felix L. Sparks from joining the Army as a way out of the Great Depression to his death in 2007. Mr. Kershaw interviewed Sparks before he died which adds to the authenticity and reliability of the story.

Sparks, the only man to survive the war from his original company, is portrayed as a man of courage, intelligence and integrity. There are numerous times when Sparks, commander in the 45th “Thunderbird” Division of the National Guard, risks his life to save his men, protecting them and flirting with danger instead of sitting on the sidelines.

The book describes the day to day grind that the soldiers had to endure, choke full of details not only of the big picture, but the small stuff that matters every day. A very poignant part is the liberation of the concentration camp Dachau, the soldiers couldn’t believe what they were seeing, and even I had a difficult time reading about the horrors which ensued in the camp.

The book is fast paced, telling a remarkable story in an easily read narrative. The story is not always easy to read, but always exciting and interesting celebrating one of the many heroes of “The Greatest Generation”.

Synopsis:
Joining the Army to get away from the depression, 25 year-old Felix Spars arrives in Italy as a captain in the 157th Infantry Regiment of the 45th Division – the Thunderbirds. Sparks proves to be a natural leader and a man of high intelligence, moral and respectability leading his men in 4 amphibious invasions, through the rough mountainous terrains of Italy and France and winter combat against the SS on the German border.

Somehow Sparks survives, one of the few in his unit to survive the bloody march, and is put in charge to lead the hunt for Hitler into Bavaria. However, Sparks and his man stumble onto the notorious concentration camp Dachau whose horrors force them to struggle with their humanity and sense of revenge.

BOOK BLOGGERS – Have you read The Liberator? If so link up your review below: