About:
The Jew Store by Stella Suberman is a memoir of the author whose father owned a store in the south. The book talks about the trials of New York Jews who moved to a small southern town. 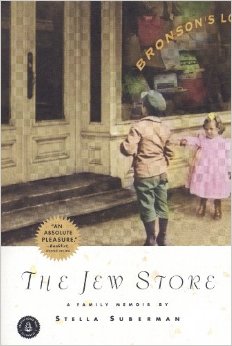 Thoughts:
The Jew Store by Stella Suberman is a quick, enjoyable memoir about her family’s adventure in Concordia, TN close to the Nashville area. Ms. Suberman’s father, Aaron Bronson, a born salesman, immigrated from Russian to America, married a nice New York Jewish girl and went south to open his own store.

Having a track record as an ace salesman, Mr. Bronson lined up some investors (or rather, they convinced him) to open a “Jew Store” around Nashville, TN. A “Jew Store”, aptly named Bronson’s Low Priced Store, catered mainly to middle working class families and African-Americans (who used the back door).

The book is not only a memoir, but a commentary about the life in a small southern town circa the 1920s. A town where almost everyone never even saw a Jew nevertheless interacted with one. While Reba, the author’s mother feared the KKK, other idiots, mixed marriage and such, Aaron was full of pride at owning his own store and became a successful businessman. Aaron was the first store owner to hire and African American and really stepped up to help the town during the depression years.

While the book could have used some more editing, I felt it was poignant, heartfelt and funny memoir. Ms. Suberman wrote a powerful book which was interesting and entertaining.