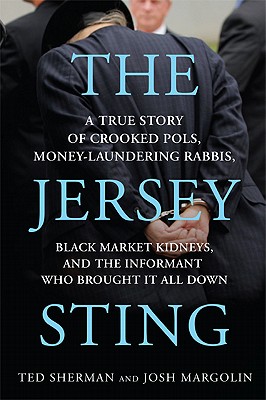 My rating for The Jersey Sting – 5

About:
“The Jersey Sting: A True Story of Corrupt Pols, Money-Laundering Rabbis, Black Market Kidneys, and the Informant Who Brought It All Down” By Ted Sherman and Josh Margolin (website | Twitter | Facebook)  is the true story of the events leading up to the arrest of 44 people in New Jersey. These 44 were corrupt local politicians, Rabbis, money launderers and, strangest of all, a black market kidney dealer.

Thoughts:
On the holiest day of the year, July 23, 2009 the FBI culminated a three year investigation by arresting 44 people for various charges including money laundering and taking bribes. All of these people were taken down by one informant, a rabbi’s son named Solomon Dwek.

Ted Sherman and Josh Margolin are two reporets who worked at the time for The Star Ledger in Newark, NJ. The two authors covered this story with the The Star-Ledger staff and were awarded the Jesse Laventhol Prize for Deadline News Reporting from the American Society of Newspaper Editors, as well as honored as finalists for the Pulitzer Prize.

The sting was authorized by then federal prosecutor Chris Christie, now the governor of New Jersey. Christie left several months before the sting ended, however despite nasty elections rumors, Christie’s campaign was never considered to be part of the equation when the date of the takedown was set.

Synopsis:
The book centers on Solomon Dwek, the son of a rabbi, born and bread in Deal, NJ. Dwek made his fortune as an unlicensed real estate broker and got caught up in a ponzi scheme until he finally had to commit bank fraud.