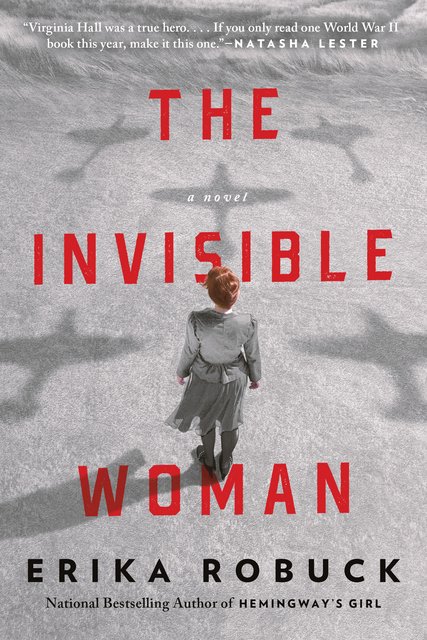 This book is the tale of Virginia Hall’s time in Occupied France. Virginia Hall was an American spy working for England and the US during the war. Ms. Hall had skills which a spy needs, a knack for languages, a sense of adventure, and as an embassy worker knew her way around politics.

The American Foreign Service refused to employ her due to her disability, a wooden leg she called ­“Cuthbert”, which she acquired after a hunting accident. A woman that could not be deterred, Virginia Hall applied, and got accepted, into the British Special Operations Executive (SOE). There she was trained in spy craft and sabotage.

Virginal spent time in occupied France, organizing spy networks, gathering intelligence, and running safehouses. Germany’s Gestapo called her “The Limping Lady”, and while she managed to leave France in 1942, she came back in 1944 to organize resistance before the Allied invasion.

The Invisible Woman by Erika Robuck is a wonderful novel, a true to life heroine, flowing narrative and excellent prose. I believe the author captured the essence of Ms. Hall, and of the time – something that every historical fiction novel attempts to do.  The hardships and dangers which are around every corner in Occupied France during World War II are always present, even though they are not forefront and center.

An American from Baltimore, Virginia Hall considered France to be second home. Virginia volunteers to work with the SOE and the OSS to coordinate the response of the French Resistance with the Allies, prior to D-Day.

A wanted woman, the Nazis know who Virginia Hall is and what she looks like. The French Resistance, on the other hand, hold her in such high regard that they could blow her cover. The fact that she has a prosthetic below the knee doesn’t help her hide.

Zohar — Man of la Book
Dis­claimer: I got this book for free (but I bought a copy to give as a gift)
*Ama­zon links point to an affiliate account