Article first published as Book Review: The Invention of Hugo Cabret by Brian Selznick on Blogcritics.

About:
The Invention of Hugo Cabret by Brian Selznick is a children’s novel taking place on the turn of the century in Paris, France. We took this book out for my daughter (7) to read, but I stayed up half a night reading it – and finished the next morning. 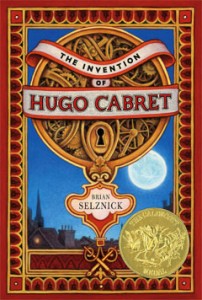 My rating for The Invention of Hugo Cabret – 5
Buy this book from Amazon.com*
More Books by Brian Selznick

Thoughts:
The Invention of Hugo Cabret (Book Website) by Brian Selznick is a very unique book. Not quite a book, not quite a graphic novel, but an amalgamation of the two where a few pages of text are followed by several pages of pictures which move the story forward instead of illustrating what one just read about.

While this book is targeted towards the young, anyone young at heart would enjoy it and especially movie buffs as Georges Méliès plays a significant part in this tale. Part folk tale, part fantasy, part history book with magnificent drawings and photographs of old films this book defies categorization. Add a boy, a girl, automaton, toys, a key, clocks, train station and a one eyed man and what you get is a fantastic fable which is simple yet complex and somewhat bizarre.

My most favorite aspect of the book as the homage to silent films, not only using context, but the rich illustrations all black and white which reminds one more of movie stills than graphic novels.

While the book is relatively long (it comes in at a whopping 533 pages) it is a short read. The text pages are short and easy to read and most of the book is the wonderful pictures mentioned above – I read the whole book in a day. Even though I borrowed this book from the library, I am seriously thinking about buying a copy of this fabulous work of art.

So tell me, which book of your children do you like the best? Synopsis:
Twelve year old Hugo shoulders a lot of responsibility for his age. His parents are dead and his caretaker is his drunkard uncle, tender to the train station’s clocks, which one day simply disappears.

Turns out that old man is actually a cinematic giant who made Hugo’s father favorite film – Georges Méliès.
And that is just the start of the story.

Buy this book from Amazon.com*
More Books by Brian Selznick