About:
The Insurgents: David Petraeus and the Plot to Change the American Way of War by Fred Kaplan is a non-fiction book which tells the inside story of a small group of soldiers who worked to revolutionize the military. I listened to the audiobook, narrated by Kevin Foley, who did a marvelous job bringing across the material in an interesting and fascinating manner. 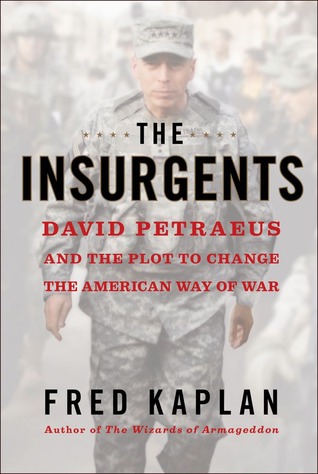 Thoughts:
The Insurgents: David Petraeus and the Plot to Change the American Way of War by Fred Kaplan is a thought provoking book which tells a good story and asks some hard hitting questions.  The book is divided into three parts: the post-Vietnam era and introduction of counterinsurgency (COIN) warfare line of thinking into the US military, the history of COIN in Afghanistan and Iraq (with input from Washington politicians), and a third part which analyzes what was accomplished and the value of this strategy.

The book introduces (to me at least) a subculture which exists in West Point called “social sciences” of officers-scholars who study non-traditional subjects.  The book goes into great length about these folks and their influence (as well as ridicule) in the military.

The book is certainly taking the point of view of General Petraeus in its narrative and makes him to be the one to take on the slow moving military bureaucracy and old-school Generals. While this might be true, and I’m sure General Petraeus had a lot to do with establishing COIN as a war we must fight, it seems to me very one sided and selective (for example the treatment of General McCrystal, or many who were not in the “social sciences” club seems unfair and arrogant).

The highlight of the book, for me, was General Petraeus’ explanation of what it means to “win hearts and minds”, which was an eye opener and gave me lots to think about. According to the General, winning hearts and minds has very little to do with the population liking you, but instead have them being vested in what you are trying to accomplish.

The final section of this book offers an assessment of COIN operations, which contrary to the rest of the book is not an endorsement. The author argues, and quite persuasively, that COIN wars are wars of choice and are usually a mistake to fight.

I enjoyed this book and learned a lot from it, the rise and fall of COIN within the military is a fascinating read. What even more fascination is how a small group of intellectual warriors managed to change a huge, cumbersome, and rigidly hierarchical organization to see warfare from their point of view.

Zohar — Man of la Book
Dis­claimer: I borrowed this audiobook from my local library.
*Ama­zon links point to an affil­i­ate account