I bought this eBook (a Barnes & Noble Classic). 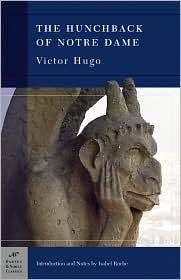 My rating for The Hunchback of Notre Dame – 4

About:
“The Hunchback of Notre Dame” by Victor Hugo (1802-1885 | Biography & Works) is a fictional story set in Paris, France and published in 1831. The novel became a classic and the Hunchback became a tragic hero as well as a cultural icon. 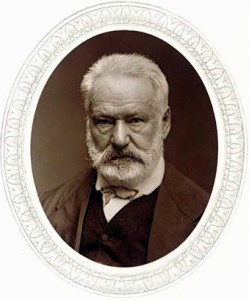 Thoughts:
“The Hunchback of Notre Dame” by Victor Hugo is a desperate and quite depressing novel. It is filled with the loneliness of 15th Century Paris, its dark corridors, streets and stench.

The book tells the stories of three tragic and lonely figures. Claude Frollo, archdeacon of Notre Dame, La Esmeralda, an enchanting gypsy, and Quasimodo, the disfigured bell ringer as well as Frollo’s adopted son. Surprisingly, Quasimodo has a small role in the book which was originally titled “Notre-Dame de Paris” or “Our Lady of Paris” – a much more appropriate, yet less imaginative title. La Esmeralda and her goat Djali
An Illustration for Notre Dame de Paris by Victor Hugo. Artist unknown.
Appears in “Victor Hugo and His Time” by Alfred Barbou. 1882

The dark, brooding and punishing interactions between the complex characters are a mastery of storytelling. The relationships of the characters with themselves are also part of this complex plot. Frollo’s struggle with Catholicism vs. desire and Esmeralda’s unwillingness to accept a revolting creature for his good heart are only a two examples of what makes this story brilliant. The story is peppered with a few twists, some humor (as much as will allow in the brooding story arc) with sarcasm and mockery galore. Frollo Carrying baby Quasimodo
An illustration from page 219 in book 4 of the 1889 edition of The Hunchback of Notre Dame.

The book’s most frustrating point, and the one which discourages many seasoned readers, is the pages upon pages of descriptive images, whether the streets of Paris down to the cracks (it seems) in the sidewalks or the Notre Dame Cathedral, brick-by-brick almost. The pacing of the book moves unevenly, most of the novel takes place over a period of six month, however the final chapters shoot forward a year and a half or two years.

Mr. Hugo got paid by the word, as were many other authors back then, however, once you get through the descriptive sections (I skimmed some of them) you’ll discover a phenomenal book which certainly deserves the “classic” stature which has been bestowed upon it. Synopsis:
Note: I assume most people know what this book is about, if you don’t – stop here!

January 6, 1482 is a holiday in Paris, France. The “Festival of Fools” is in full swing and the deformed bell-ringer of Notre Dame Cathedral, Quasimodo, is crowned as the Pope of Fools.

Among the crowd is the beautiful Esmeralda, a gypsy girl with a kind heart and a mischievous goat. Esmeralda captured the hearts of many men including Quasimodo, Claude Frollo the Archdeacon of Notre Dame and Quasimodo’s adopted father, as well as Captain Phoebus de Chateaupers. Frollo, who is torn between his heart’s desire and the church’s code, orders Quasimodo to kidnap Esmeralda. However, Quasimodo is captured by the guards, led by Captain Phoebus, who whip him and leave him tied down in the heat. Esmeralda offers him water, saves his life and captures his heart in the process.

Frollo, up to his old tricks again, tried to kill Phoebus whom Esmeralda clearly prefers; however he fails and frames Esmeralda for the assassination. As she is led to the gallows, Quasimodo swings down from the tower and carries her off to the cathedral. Under the law Esmeralda is now in a sanctuary. The criminals of Paris charge the Cathedral to save her, the King who happens to be in Paris as well vetoes the law of sanctuary and commands his troops to capture and kill Esmeralda.

Mistakenly Quasimodo believes that the criminals are trying to hurt his beloved and drives them off. Frollo however hands Esmeralda to the troops. While watching her hang, Quasimodo pushes Frollo off the tower to his untimely end.

In a dark and disturbing ending, Quasimodo lies next to Esmeraldas’s body in a mass grave, his arms around her, and eventually dies of starvation.

BOOK BLOGGERS – Have you read “The Hunchback of Notre Dame”? If so link up your review below: