About:
The Honest Spy by Andreas Kollender (translated by Steve Anderson) is a historical fiction book about a German clerk spying for the USA. This is a fictionalized account of Fritz Kolbe, one of the most important resources the allies had during that time. 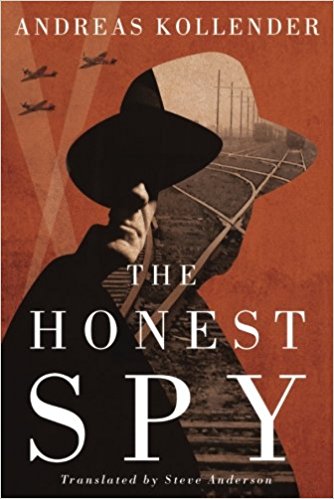 Thoughts:
The Honest Spy by Andreas Kollender (translated by Steve Anderson) is an amazing account, fictionalized as it may be, of Fritz Kolbe, an ethical man living in a most unethical place and doing his best to do what he knows is right.

The author created a very convincing novel, telling the story of Mr. Kolbe both in the present as well as with the advantage of hindsight. Even though the story is about a middle aged clerk, a gray man with a gray job, it was an intense read full of suspense and humor.

The story captures the integrity and bravery of Mr. Kolbe. He jeopardized his life over the course of years to do what he believes is right. Sadly, after the war, the Germans considered Mr. Kolbe a traitor and he had a difficult time finding work.

This is a riveting book, based on a real life hero. I wish some details were left in, such as how Mr. Kolbe took blank passports and helped Jews escape but I understand that sometimes stories have to error on the side of the narrative and pace. A big kudos to the translator, Steve Anderson, for a job well done.

Synopsis:
Fritz Kolbe, a widowed clerk, has been called back to German from South Africa. Recognizing the evils of the Nazi regime from afar, Fritz leaves his only daughter in Africa and returns to Berlin to do his duty.

Recognizing that he’s on the wrong side of the war, Mr. Kolbe uses his position to pass information to the Americans.