About:
The Happy Ending by David Stokes is a fictional book taking place in the present, while tackling a very serious issue. Mr. Stokes an Emeritus Professor and published several non-fiction books previously. 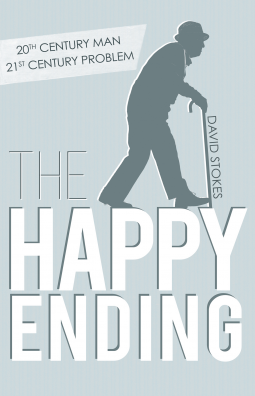 Thoughts:
The Happy Ending by David Stokes is a simplistic book telling a complicated story. I liked that the author did his research when it comes to human trafficking, the sad statistics about huge numbers and low conviction rates are depressingly accurate. The main protagonist, Harry Pigeon, is complex, hard headed and sad – he takes the advice of his beloved wife, six years dead. The other characters, while some with somewhat interesting backstories, are never fully developed.
I would choke that up to the author erring on the side of length.

I really enjoyed the protagonist, but I think the author went out of his way to make him naïve. He doesn’t like computers, knows nothing about GPS, and is shocked to hear what’s going on inside strip joints.
He was in the military, he would have known. Even as dim witted as the old man might be… he would have known.

There is another story in this book though, and that is of an old man aging not so gracefully. He finds himself old, all of the sudden, a man with little family and belonging to a generation which is quickly starting to become history.

The author implants some plot ideas in the begging of the book which become pivotal later on. I like those types of books and I know how much work it takes to implement them, somehow it barely worked here but not because lack of effort.

The plot is what holds this book together. The slavery aspect is and victimizations of young women is a sad and shameful reality which we all live in. the author wants the reader to read the dark narrative with a twinkle in their eye, appreciating the humor in the margins of this story but that is not easy to do.

By the way, the “happy ending” in the title … is exactly what you’re thinking of.

Synopsis:
Ninety seven year old Harry Pigeon is becoming a frail widower who relies on his walker (walking frame) for mobility.  When a car crashes into his gates, a young Filipino girl asks for his help which the old man gladly obliged.

Mr. Pigeon is then drawn into an underworld scene of crime and human slavery. The people he meets are deadly and efficient and he must battle wits and call in his connections to try and overcome them.

Buy The Happy Ending  from Amazon.com*

Zohar — Man of la Book
Dis­claimer: I got this book for free.
*Ama­zon links point to an affil­i­ate account.