About:
The Greatest Beer Run Ever: A True Story of Friendship Stronger Than War by John “Chickie” Donohue and J. T. Molloy is a memoir in which the author goes on a journey into 1967, in the midst of a war, to bring beer to his pals from his New York neighborhood. Ms. Molloy was a staff reporter and columnist at the NY Daily News, the NY Post, and New York magazine. 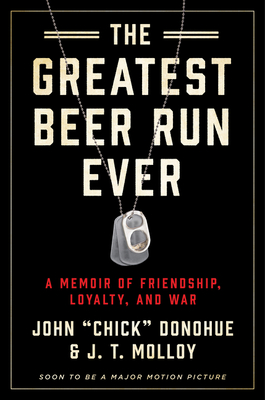 Thoughts:
If this story wasn’t true it would have been unbelievable, falling squarely under the category of “if I knew what I was doing I wouldn’t do it”, a category which I am also, proudly or not, a member of.  As all crazy ideas, and tattoos, start this one also took place in a bar over drinks. The bartender came up with an idea to sneak into Vietnam, in the middle of a war mind you, and bring local beer to the boys from the neighborhood. As a merchant marine Chickie Donohue was volunteered for the job, got work on a ship heading that way and thus an insane, but well-meaning journey began.

The Greatest Beer Run Ever: A True Story of Friendship Stronger Than War by John “Chickie” Donohue and J. T. Molloy is one of those feel good memoirs, it’s funny, moving at times, with an overview of history of someone who had been there, and has a hindsight of decades later. Mr. Donohue can sure spin a tale, form the book I gathered he had a lot of practice, I can imagine him telling this story with a twinkle in his eye, a funny story which is no joke.

Mr. Donohue’s neighborhood seems to be right out of the movies, a neighborhood where everyone know one another, and neighbors help neighbors. I wish places like that still existed, but only in my most utopian inner thoughts. I also think back to my childhood with rose colored glasses, but the pessimistic analyst in me recognizes that it wasn’t like that.

This is a quick and easy read, with a fantastic story which one could simply not make up, as a fan of beer myself, I enjoyed this book very much. I understand it is going to become a movie soon, and my only question is “where to I buy a ticket?”