The Girl Who Saved the King of Sweden by Jonas Jonasson (translated by Rachel Willson-Broyles) is a fictional book from the successful Swedish author. 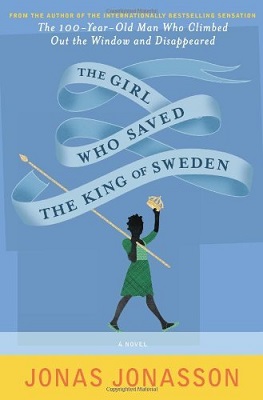 I really enjoyed The 100-Year-Old Who Climbed Out Through the Window and Disappeared by Jonas Jonasson, so when I saw that The Girl Who Saved the King of Sweden was on sale I immediately bought it and hoped for another great experience. The book did deliver with Jonasson’s large cast of characters, complex stories and satire which encompasses a lot of the world.

The stories that the author tells are unbelievable at best, however he seems to subscribe to the same theory as Maxwell Scott from The Man Who Shot Liberty Valance “No, sir. This is the West, sir. When the legend becomes fact, print the legend”. The stories which make up the book are both absurd and spot-on and, most amazing of all, somehow work nicely together (warning: the ability to suspend disbelief is a must to read this book).

While I do like puns, absurdity and political satire, after a few hundred pages it becomes tiring and predictable. Starting to read sentence or a paragraph I knew that, inevitably, a contradictory statement will inevitably follow (something akin to “’I always tell the truth’, he lied” – quote not from this book).

As someone who himself likes to spin tall tales (and gets a kick at finding out that the more ridiculous they are, the more people will believe them), in enjoyed this book very much. While it lacks the certain charm which the author’s debut work captured, I still learned a few things and had some good laugh with, or at the expense of, some memorable characters.

Nombeko Mayeki was born in 1961 to a poor, single mother in South Africa. Nombeko had to grow up fast and soon discovered she has the affinity for mathematics and language. Managing to escape her fate emptying latrines she made the mistake getting run over by a car belonging to a white engineer who was an incompetent alcoholic and thus charged with South Africa’s nuclear program.

Nombeko was sentenced to serve the engineer 7 years until she repaid for his pain and suffering, causing dents to his car while he swerved to avoid her as she jumped into the street (and besides “she had been walking on a sidewalk meant for whites”). The engineer soon found out that Nombeko can do his job for him.