The Girl Who Played with Fire by Steig Larsson is the second book in The Millennium Trilogy – the first being The Girl with the Dragon Tattoo (Book Review) and tells the tale of the infamous Lisbeth Salander – the woman who hates men who hate women – and her acquaintance, our ace investigative journalist Mikael Blomkvist. 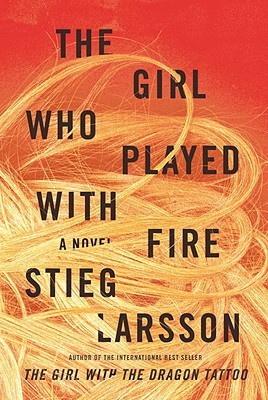 Let me start by saying that I’m glad that the good folks in the Larssonverse have laid off the coffee a bit. It can be dangerous for your health to drink so much coffee.

The story starts by Blomkvist and pals working on exposing a Swedish sex trafficking operation specializing in teenage prostitutes kidnapped or lured from the Eastern block. Some high profile people are either in that ring or have used their services are going to be exposed when all hell breaks loose and Salander becomes Sweden’s most wanted criminal.

To avoid capture Salander disappears while the newspapers have a field day with the psycho-S&M-Devil-Worshiping-Lesbian – a juicy item indeed if I may say so myself.


A manhunt ensues which is when we learn of Salander’s childhood, traumas and events which shaped her to be the adorable young anti-social person we know and love.

Character wise with the exception of Salander no-one is really well developed. The bad guys are cartoonish as if they jumped out of a 007 movie, the cops are portrayed incompetent caricatures and the rest of the gang we got introduced to in The Girl with the Dragon Tattoo are simply just “there”. Basically the good guys are purely good (considerate, reasoned, unselfish) and the bad guys are purely bad beyond any reasonable measure.

However, this is a fun book; the book can be ridiculous at times and riveting at others. The character of Salander, who was somewhat believable in the first novel is taken to extremes in this one, but is still great fun even though the “chance encounter” plot twist is a bit overplayed.

A nod of acknowledgment to the wonderful translation by Reg Keeland, even though it would be nice to see in future versions and / or other stories from the cold countries, a pronunciation key for places.

Buy The Girl Who Played with Fire from Amazon.com*
More Books by Steig Larsson*

The Girl Who Played with Fire by Stieg Larsson