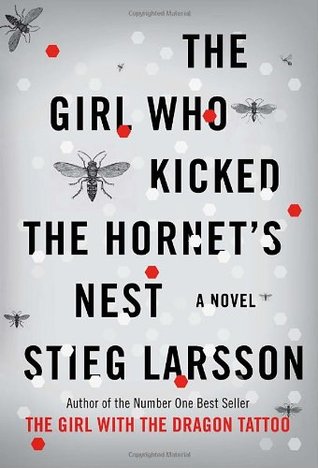 The first book “The Girl With the Dragon Tattoo” (book review) concentrated around introducing the cast of characters to the reader.  In the book Blomkvist had his professional reputation destroyed and is forced (financially) to accept an assignment from an elderly, rich industrialist, Henrik Vanger, to solve the mystery of his missing great-niece.  Vanger’s people researched Blomkvist background by hiring a security firm which unleashes their best researcher on him, Salander.  After Blomkvist learns of this he teams up with Salander and the rest is history.

If you haven’t read “The Girl With the Dragon Tattoo” – STOP HERE!!!!

The second book, “The Girl Who Played With Fire” (book review) is a middle book in all sense of the word.  There is no beginning and no end, although it is not altogether bad (think “Lord of the Rings: The Two Towers”).  The book picks up with Blomkvist and Salander move to the north of Sweden to the Vanger family’s island.  The Vangers are so rich that they live in their own universe filled with dysfunctional, backstabbing and mistrust of close relatives.  Even though book #2 is entertaining, it is cartoonish, over the top and a bit silly.  Investigating a sex trafficking ring Blomkvist stumbles upon an ex-Soviet spy named Alexander Zalachenko.  Lo and behold Zalachenko is Salander’s father who still holds a grudge because she tried to burn him when she was 12 (“…played with fire”).  Salander holds a grudge because Zalachenko beat her mother senseless and caused her brain damage.
And you thought the Vangers were screwed up?

Zalachenko frames Salander for a bunch of murders committed by his German henchman (who feels no pain due to a neurological disorder), then tries to kill her and buries her alive only for our beloved anti-social hacker to come back and exact her revenge using an ax to the head.
Like father like daughter.

“The Girl Who Kicked the Hornet’s Nest” brings the series down to a more dignified world where, I’m sure, Starbucks are the kings of the universe and Subway are following close behind.  Somehow Zalachenko survived the ax-to-the-head incident and now the Swedish Security Police are all up in arms because it might be discovered that they ignored the constitution in order to give him protection and did such horrible things as lock up a 12 year old girl in a mental institution so she won’t be able to finger the defector.  Only that it’s now the whole Security Police, but just a fringe group of old spies.  However they have no idea who they are dealing with and are the main adversaries to Blomkvist and Salander.

The third book of the series if finely crafted much like the first.  Larsson does a skillful job at interlacing between the good and the bad, the intelligence agencies, the police and the media.  While the first book was about corporate takedowns, the second about the sex traffickers this one is more of a courtroom drama.  .There are still many elements which the first two books incorporate: Salander and Blomkovist punish their enemies, strong female characters, relaxed attitude toward sex and, as mentioned, strong opinions about government, corporations and sleazeballs in general..

Throughout the book it seemed that Larsson spread his own personal anti-corporate agenda a bit too thick to the point where it was almost disturbing.  There are subplots which do not enhance the story, unless you take into account the author’s personal ideals (which I try not to) and rants about men who enable violence against women.  That’s all fine and well but it would be better left for a book club questions type guide which accompanies many books. Unlike the previous books, I found the ending of “The Girl Who Kicked the Hornet’s Nest” a bit rushed and almost confused.  It felt as if Larsson’s editors had to cut the book down to a manageable size (relatively speaking) and that’s with only briefly introducing the characters, since they were introduced in the first book.

However, the blatant activism is forgivable and to end on a good note, I’m happy to report that none of the characters have died of coffee overdose, as I was sure was going to happen.
A kind word to Reg Keeland who must have drank tons of coffee during the fine translation of this book.

Buy The Girl Who Kicked the Hornet’s Nest from Amazon.com*
More Books by Steig Larsson*

The Girl Who Kicked the Hornet’s Nest by Stieg Larsson