“The Gilded Chamber: A Novel of Queen Esther” by Rebecca Kohn is a familiar story, Hadassah, a Jewish orphan, is being brought to the court of King Xerxes as a possible queen. Hiding her Jewish origins she changes her name to Esther, becomes queen and saves the Jews from certain death (now…let’s eat). 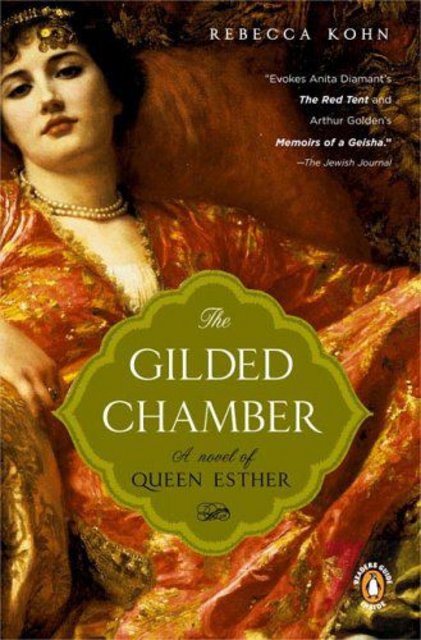 The book itself is very inventive biblical fiction, I must give the author credit and I really enjoyed the first part of the book. However, for me the book took a wrong turn by not sticking with the biblical timeline and taking too many liberties with the “fiction” part of biblical fiction. Part of my enjoyment reading fiction is that I learn something along the way, if I have to pick apart what’s accurate and what’s not it takes away from the experience.

The female characters are drawn very nicely, but the males seemed to be a bit flat and uninteresting. That’s too bad because Xerxes, Mordechai and Haman are fascinating cultural, historical and biblical characters by their own right.

This is not a criticism, just an observation.

Another issue is consistency. The king is depicted as a raging drunk in one scene, and as a benevolent monarch in another and from some reason Esther’s portrayal changes towards the end of the book. However, these might be just me nitpicking because I really like the Book of Esther.

Overall I liked “The Gilded Chamber” . It was engaging, entertaining and doesn’t sugar-coat (too much) the harsh life women had (even royalty).

Zohar — Man of la Book
Dis­claimer: I borrowed this book from the local library.
*Ama­zon links point to an affil­i­ate account, the money is usually spent on books

The Gilded Chamber: A Novel of Queen Esther by Rebecca Kohn