The Ghetto Within by Santiago H. Amigorena (translated by Frank Wynne) tells of a Polish Jew living in Argentina, feeling lost during World War II, and worrying about his mother in Europe. Mr. Amigorena is an award-winning French author. 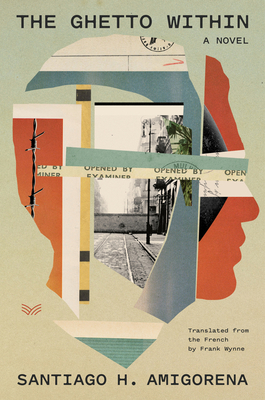 The Ghetto Within (Le Ghetto intérieur) by Santiago H. Amigorena has a unique take on a “holocaust novel”.  The story about Vincente Rosenberg, who managed to escape before the atrocities began. Vincente, however, is suffering from tremendous guilt about leaving his mother and siblings behind.

The story, of course, is over several years. During those years Vincente sees the letters from his mother, a lifeline, as hopeful instead of a chore. And when they, at last, stop arriving, he falls into a deep depression. Vincente’s every need is fulfilled, a wonderful wife, family, great job, money, and friends, meanwhile his mother is suffering under the Nazi boot. Vincente and his friends find out, like the rest of the world, what is happening through newspapers. A slow, probably agonizing, way for news which might already be irrelevant by the time they’re reading them.

The Ghetto Within by Santiago H. Amigorena also deals with issues of identity, as many immigrants do. Are they Argentina? Polish? Polish-Argentinian? Jewish?  Do they belong anywhere at all?

Even though this book is short, the style is gripping and the narrative moves quickly. It was also difficult for me to realize that this book is translated, kudos to Frank Wynne on the fantastic job.

The author represents the silence that Shoah victims are known for by having Vincente stop talking. He simply can’t bring himself to speak, building a wall around himself and everyone else. Vincente’s silence is so tremendous that he can’t even touch his kids, or say a nice word to his beloved wife.

I don’t know why the novel takes place in Argentina, maybe because it’s semi-biographical. I found it ironic, with history in hindsight, that Vincente and others escaped to the same country which would later shelter war criminals.

I’ve read many books about World War II and the Holocaust, and I never thought I’d find an original one. The author combines fiction, prose, as well as history into a deep, and very personal novel.

Three friends, all Polish exiles, meet in a café in Buenos Aires. It is 1940 and they wonder why they got out of Europe a few years earlier, but not their friends or families.

Vincente Rosenberg’s ties to Poland involve his family, not necessarily his nationality. He has embraced Argentina’s life and culture got married, and is raising his three kids. When his mother’s letters lessen in frequency and stop, Vincente is racked with guilt and falls into a deep depression.

The Ghetto Within by Santiago H. Amigorena