The First Stone by Carsten Jensen (translated by Mark Mussari) is a novel which follows a Danish platoon fighting in Afghanistan, who find themselves as not only hunters, but as prey as well. Mr. Jensen is an award winning author and journalist. 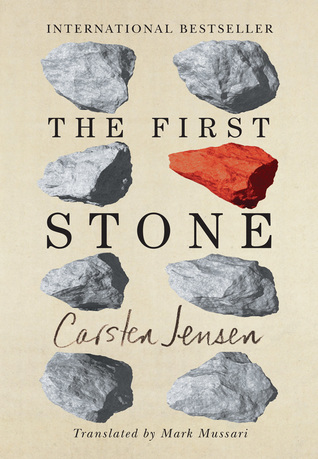 One of my favorite books is We, the Drowned and I have been looking forward to read more of the author’s books ever since. I have been, for years, checking to see if he came out with a new book and was very excited when The First Stone by Carsten Jensen (translated by Mark Mussari) popped on my screen.

This book is an excellent read, fast paced, unpredictable, and quite bloody. Mr. Jensen has an understanding about Afghanistan that I wish some of the world leaders had, or at least admit to having instead of spewing that day’s talking point.

I felt that Mr. Jensen tried to push his ideas a bit too hard, to the point where it was obvious instead of letting the readers figure it out. That being said, I think readers will have a much better understanding of this unforgiving country, its culture, factions and the hell the troops have to go through while stationed there.

The book is divvied into three parts, one of the common themes to them all is a Shakespearean power struggle, among different people, which would make Macbeth proud. Any Afghan or foreigner that ties himself to the “common people” eventually gets removed or killed, only to be replaced by a more placating figure. The struggle to “win hearts and minds” takes a backseat to fighting a war disregarding the plight of the population the Danes came to help.

The book is very violent, with some graphic descriptions of the horrors and savagery the soldiers witness. There are many subplots involved and the book could have easily been twice as big, but it certainly kept my interest throughout.

A platoon of Danish soldiers, part of NATO forces, are hampered down in Afghanistan fighting the Taliban. Third platoon has a charismatic and brave leader, Schrøder, who answers to Colonel Steffensen. The two man are polar opposites.

The soldiers embark on a revenge mission, without realizing they are being set up by a traitor from within. Third platoon realizes that in war you have to make inconvenient allies, and embrace strange bedfellows just to survive the day.
If you’re lucky.

The First Stone by Carsten Jensen