About:
The Explorers Guild: Volume One: A Passage to Shambhala by Jon Baird and Kevin Costner is a fictional book taking place around the world during World War I. The book is written in narrative, as well as comic strips and maps peppered throughout. 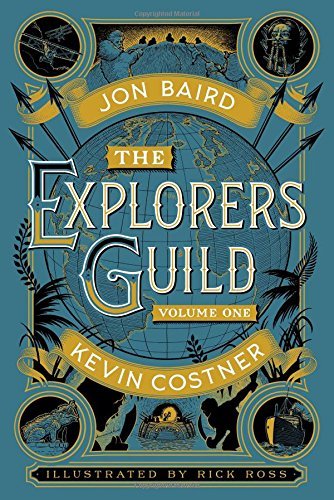 Thoughts:
The Explorers Guild: Volume One: A Passage to Shambhala by Jon Baird and Kevin Costner (yes, that Kevin Costner) is an unusual book and an unusual read. What first caught my eye was the gorgeous cover and when I flipped through the book, saw the formatting and the artificial aging of the page, I was hooked.

The story is not an easy read, the narrative and plot demands attention. The numerous characters are captivating and engaging, the settings are fantastic. The writing is reminiscent of adventure stories of days of yore, when Tarzan and Mowgli ruled the imagination and young Jim Hawkins traveled to far away islands looking for treasure.

There are many good things going for this book, except what I would have thought would have been one of my favorite parts, the comic strips. I don’t know why the authors chose to illustrate the scenes they did. Comic panels could have shown actions and move the story forward, and some do but most don’t. Instead of telling the story, the reader gets pages and pages in graphic novel format of… two people talking – a conversation. This decision left me baffled, why would you choose to illustrate those parts when they should remain written instead of illustrating more of the action?

This is a wonderful, and epic, adventure which reminded me of the golden age of adventure stories which still stand true today. The beautiful design alone of this book is worth a look for any bibliophile, even if you might not enjoy the story.

Synopsis:
A secret group of adventurers, calling themselves The Explorers Guild, focus on finding mysteries around the world which are beyond what mortal men know or comprehend. Major Ogden, a fearless soldier, is searching for the lost city of Shambhala so he can save his brother, who came back sick from the city without any memories of it.

Major Ogden and his dragoons go on a worldwide adventure which under the guise of fighting in World War I. Along the way they meet a movie star, a child they must protect, secret organization and much more than they bargained for.

Buy The Explorers Guild: Volume One: A Passage to Shambhala from Amazon.com*