The Ethereal Squadron by Shami Stovall is a fantasy novel which reimagines World War I involving sorcerers soldiers. Ms. Stovall is an author and history professor from California. 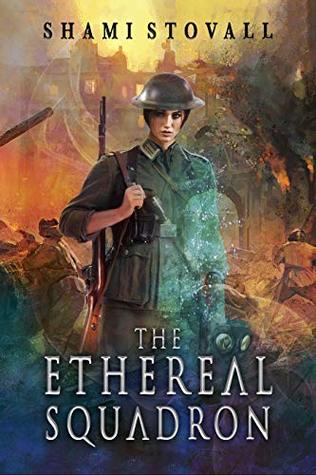 My interest in fantasy books which involve magic has everyone I know, including myself, bewildered. The Ethereal Squadron by Shami Stovall seems to hit almost all the buttons for me, magic and historical fiction, who could resist?

The protagonist in this story, Geist, has a lot to deal with, not only is she a woman pretending to be a man (pretending to be a woman in one case), but she also has deal with leading men who are far better soldiers than she is, and they don’t’ completely trust her. Geist constantly questions herself and her abilities, but she is sure of two things: her belief that what she is doing is right, and that she most likely won’t survive.
The fact that she’s the daughter of a powerful enemy doesn’t help either.

The author also delves into the pre-World Wars class structure in Europe, something which we associate with medieval times, not necessarily with countries which consider themselves “enlighten”.  Geist, however, can thank that rigid structure of not only political alliances, but also breeding, for her unique gifts.

I really liked that the author did her research, I was a bit skeptical about the technology (the “historical” part), but found that on the few things that I checked, they did exist in World War I. With the exception of some machines which are part of the sorcerer’s world, the weaponry and equipment are accurate, as far as I could tell.

The plot moves quickly and fluidly, the characters have consequences to their actions and cannot just wave a magic wand (pun intended) to get out of difficult situations. Focusing on a small cast of characters, tied together by choice and circumstances, lets the story come together and unfold in a timely manner.

Florence Cavell, Geist to her fellow soldiers, is a sorceress in the Ethereal Squadron, which employs the best sorceress from the US and the UK. Unbeknownst to her teammates Geist is a woman who defied her family by disguising herself as a male and joining the war.

Geist discovers that the Germans have produces a gas, nicknamed Grave-Maker, which can even kill the strongest sorceress she knows. This new weapon assures a German victory, at the expanse of the lives of millions of civilians, unless Geist and her team can stop them.

Zohar — Man of la Book
Dis­claimer: I borrowed this book for free.
*Ama­zon links point to an affil­i­ate account

The Ethereal Squadron by Shami Stovall