“The English Assassin” is the second installment of the fictional Gabriel Allon series, where we find our sensitive and scarred spy taking on the Swiss bankers who helped the Nazis during WWII and are still hiding old Jewish money and treasure under the boardwalks of Zurich. 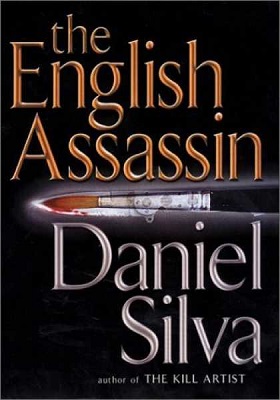 Mr. Silva’s narrative is fast paced and uncluttered. The book’s descriptions are detailed but not over bearing and the action sequences are brutal and effective. The characters do not get lost within the book’s descriptive prose; they are all individuals, rich and well rounded. The incredible historical research is pouring out of the book, the insight into the world of art restoring is distinct and refreshing, but still manages to be engrossing as well as entertaining.

As in the first novel, “The Kill Artist” (Book Review), the reluctant Israeli spy, Gabriel Allon, is joined by a world famous woman, this time though she is a violinist named Anna Rolfe, on his adventures. As in his previous novels, author Daniel Silva brings back characters he created in the “Silva Universe” which are always a pleasure to reacquaint with. The novel is a mystery within a mystery – after recovering some missing paintings Allon goes after the Swiss banking cartel that has been hiding them. In the midst of the all the globetrotting, Allon has to avoid assassination attempts from a worthy adversary, an English assassin, however the least said the better in order to avoid spoiling the story.

Zohar — Man of la Book
Dis­claimer: I got this book from the local library.
*Ama­zon links point to an affil­i­ate account, the money is usually spent on books

The English Assassin by Daniel Silva